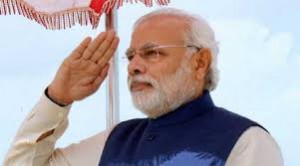 NEW DELHI : Unfazed by criticism from Opposition, Prime Minister Narendra Modi will on Friday afternoon address students across the country on the occasion of Teachers’ Day. The Human Resources Development Ministry headed by Smriti Irani had earlier issued notice directing all educational institutions to ensure maximum presence of students during the Prime Minister’s speech.
However, the move backfired and triggered criticism forcing the HRD Ministry to later clarify that attendance is not mandatory but it would be good if maximum students could attend the event.  PM Modi’s speech and interaction would be shown to kids across the country through television and even webcast. To be able to attend the PM’s speech, students will have to stay back till 5 pm, while schools generally close by noon on September 5.
In the first mass contact programme of its kind, Prime Minister Narendra Modi will interact live with millions of young students and teachers across the nation> PM Modi will address the students from 3 pm to 4.45 pm through satellite link and live telecast on Doordarshan and the human resource development ministry website. Related Jammu and Kashmir Students to Miss Prime Minister’s Speech on Teacher’s Day 700 Students from Delhi Schools to Attend PM Modi’s Teacher’s Day Event

He will address about 1,000 students from various Delhi schools at the Manekshaw Auditorium in New Delhi, which will be broadcast live by all Doordarshan channels to over 18 lakh government and private schools in the country, as well on radio. Live streaming on the web would also be available.  Imphal, Bhuj (Gujarat), Dantewada (Chhattisgarh) and Thiruvannamalai (Tamil Nadu). (Jammu and Kashmir Students to Miss Prime Minister’s Speech on Teacher’s Day) He will also take questions from some students across the country through video-conferencing.
The practice has been in vogue in Gujarat where Mr Modi was Chief Minister for over a decade till he became Prime Minister after this year’s general elections. Though Human Resource Development Minister Smriti Irani has assured attendance of students in their schools would be “completely voluntary”, the exercise has kicked up controversy with many political parties and others questioned the timing of the address to students, which comes as PM Modi completes 100 days in office.
After the HRD ministry made the announcement last week, the Central Board of Secondary Education (CBSE) and state education departments sent notices to schools asking them to make necessary arrangements for children to view the prime minister’s address.
The CBSE, which has 12 million students across 12,504 schools, including 1,002 Kendriya Vidyalayas, 1,944 government schools and 8,966 independent schools, had in its notice said that suitable arrangements will need to be made to enable children to stay from 2.30 p.m. to 5 p.m. in the school on September 5.  Many morning schools have changed their schedule on Friday to later in the day to accommodate this change and also asked the transport vehicles to adhere to the changed timing. Asked why PM Modi was holding such an event, a senior official told Reporters  “He is a man who likes to be in touch with all kinds of people. He sees children as the real future talent.”
Schools have been asked to report back (through a Google form) on the arrangements made, and also on how it went off, after the show is over. Similarly, a circular from Delhi’s education directorate has also said that any “laxity in the arrangements shall be viewed seriously”. The event has led to logistical concerns for some teachers and students, with many private transporters not agreeing to ply in the evening hours. Several school principals and teachers told that they had not received any formal communication about the participation being voluntary.
A school principal, who did not want to be named, said they have decided to run the school from 12 noon till 5 p.m. in view of the prime minister’s address and reschedule their own Teachers’ Day programme. Another principal of a private school in Delhi said around 100 students will stay back to attend the prime minister’s address and would be provided snacks.
“For the other students, we will send out a bulk SMS asking them to watch the address wherever they can,” she added. Though most states are adhering to the programme, the West Bengal government has clearly said that it will not make any arrangement for students to watch the PM’s address and would “go forward with its own pre-declared programme”. (Schools in West Bengal to Skip PM Modi’s Teachers Day Telecast to Students) Besides the address, an essay competition “Guru Utsav 2014” has also triggered controversy. The Congress and other parties, especially in Tamil Nadu, have accused the government of trying to rename Teachers’ Day as ‘Guru Utsav’ though Ms Irani has clarified that Guru Utsav was an essay competition and the winning students would get prizes on Friday. Teachers’ Day is celebrated to mark the birth anniversary of educationist and scholar Sarvepalli Radhakrishnan, the first vice president and the second president of India.