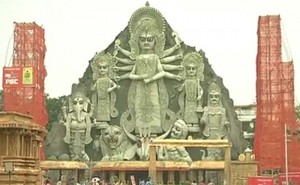 KOLKATA: 11 people were injured in a stampede on Sunday at a pandal in Kolkata that has the tallest Durga idol.  The incident occurred in the evening as hundreds jostled to see the 88-foot tall idol at Deshapriyo park in south Kolkata.
The police stopped ‘darshan’ of the idol indefinitely for safety and security reasons.With traffic thrown into a chaos in the area due to the rush, city police chief Surajit Kar Purakayasta and a team of senior officers had to take the Metro to visit the pandal.

“The crowds are unprecedented. The organisers have not taken the steps they were supposed to,” said the police chief.Organisers, however, denied the charge, saying they had adhered to all rules and suggestions by the authorities but agreed the crowds were unprecedented.
Even the metro services were disrupted as the massive crowd headed underground, aiming to get off at Kalighat station nearest to the tallest Durga pandal.
The rush was all the more remarkable, given the pujas start on Monday. The key days of the four-day festival are Saptami, and Ashtami – which are on Tuesday and Wednesday.