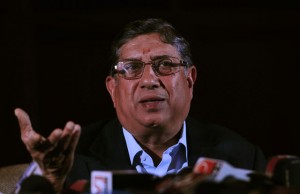 MUMBAI : The International Cricket Council Board on Saturday approved a comprehensive resolution relating to the governance, competition and financial models of the ICC at a meeting in Singapore. BCCI president N. Srinivasan will become ICC’s first chairman from July 2014.
The Board of Control for Cricket in India-piloted revamp plans for the International Cricket Council have finally seen the light of the day. Even though the cricket Boards of Pakistan and Sri Lanka abstained from voting, BCCI president N. Srinivasan mustered the support of eight Full members in Singapore on Saturday to become the first chairman of the ICC. South Africa, which had initially objected to the revamp proposals, calling them “fundamentally flawed,” finally towed India’s line. Srinivasan’s appointment is from July this year as the game’s governing body will see a new set of rules related to governance, competition and financial models. However, the ICC Board will continue to be the primary decision-making body.
India, Australia and England will now become the big boys of world cricket. They will occupy the two of the most-important committees of the ICC. A new Executive Committee will be formed to report into the ICC Board. The initial Chair of this Executive Committee (ExCo) will be Wally Edwards from Cricket Australia while the Chair of the Finance and Commercial Affairs Committee (F&CA) will continue to be Giles Clarke from the England and Wales Cricket Board. These roles will be for an initial two year transitional period to 2016 only. Once this transitional period is completed, the Chair of the ICC Board will be elected from within the ICC Board with all Full Member Directors entitled to stand for election. BCCI, CA and ECB – will be represented on both sub-committees, along with two representatives of the other Full Members (who will be elected by the Board).
The ICC took several major decisions on Saturday. It is clear that many of these decisions have the backing and brains of television broadcasters who pay the largest chunk of revenue to world cricket. The World Test Championship will be replaced with an ICC Champions Trophy in 2017 and 2021 and in the new scheme of things, India will get the lion’s share (reportedly 80 per cent) of ICC’s revenue. Full Members will gain greater financial recognition based on the contribution they have made to the game, particularly in terms of finance, their ICC history and their on-field performances in the three formats.
The structure of the revenue model will ensure that none of the Full Members will be worse off than they are at present and — if forecasts of revenue generation prove to be correct – all will be significantly better off. The agreement of the model has been an important part of a wider negotiation that will now provide long-term certainty of participation in ICC events by all of the Full Member teams.
Several of these decisions still now need to be considered and adopted by the ICC’s Full Council. The relevant resolutions will now be drafted through the appropriate committees, including the Governance Committee and the Board before being submitted for approval to Full Council which normally meets in June every year.
The following are some of the major decisions taken:
Test Cricket Fund:
A Test Cricket Fund will be introduced to help ensure all of the Test playing teams will be able to sustain a home programme of Test cricket through to 2023. The fund will be available to all of the Test playing Members except BCCI, CA and ECB.
Bi-lateral agreements:
All Full Members will enter into a series of contractually binding bi-lateral agreements as a matter of urgency so that they can confirm a comprehensive schedule of matches in a Future Tours Programme that will now be extended to 2023.
Big opportunity for Associate Members:
Associate Members now have a clear pathway to playing Test cricket. The winner of the next ICC Intercontinental Cup will be entitled to take part in a play-off against the bottom-ranked Full Member and, if successful, obtain Test status. This complements the pathways that are already in place for any Member to be able to qualify for the major events in ODI and T20I cricket.
Attractive package of major ICC events:
The World Test Championship will be replaced with an ICC Champions Trophy in 2017 and 2021. With the ICC Champions Trophy alongside the World Cup and World Twenty20 and the formats and venues already confirmed for all of these events the ICC has a really attractive package for 2015-23 to take to the market.