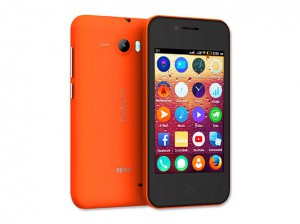 NEW DELHI: Spice has launched the Fire One Mi-FX 2, a Firefox OS smartphone priced at at Rs. 2,799 that has been made available to buy from the company’s e-commerce website – Saholic. The handset is the successor of Spice Fire One Mi-FX 1 that was launched in August.
The dual-SIM supporting Firefox OS 1.4-based Fire One Mi-FX 2 features the same 3.5-inch HVGA (320×480 pixels) resolution LCD display as its predecessor, and also packs a 1GHz processor (unspecified). The RAM however, has been upgraded from 128MB to 256MB. The camera pixel count has also been bumped-up from 1.3-megapixel on the rear camera to 2-megapixel, and 0.3-megapixels on the front-facing camera to 1.3-megapixels.
The Spice Fire One Mi-FX 2 equips 512MB of inbuilt storage, which can be further expanded via microSD card (up to 32GB). An 1100mAh battery rated to deliver 6 hours and 30 minutes of talk time, and 4 days of standby time on 2G networks, backs the handset. The battery capacity here has been downgraded from the One Mi-FX 1’s 1400mAh.

Available in Tangy Orange, Midnight Black, and Ash Silver colour variants, the Fire One Mi-FX 2 features 3G connectivity, Wi-Fi, FM radio, Bluetooth 3.0 and USB connectivity.Spice, while introducing its range of Firefox OS smartphones last year, said that the handsets targeted those feature phone users who wanted to shift to a smartphone available at a low cost.
Notably, Intex was the first company to introduce Firefox OS smartphones in India last year with its Intex Cloud FX. It features similar specifications to the Spice Fire One Mi-FX 1.