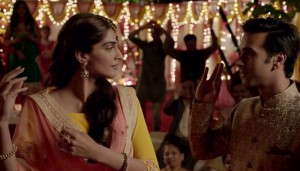 MUMBAI: Arbaaz Khan productions latest venture ‘Dolly Ki Doli’ has raised the curiosity bars because of its unique storyline and unusual casting. Lead actress Sonam Kapoor will be seen as a runaway bride reportedly.
The film has some foot-tapping numbers, which will leave you asking for more. The makers recently released the full song, ‘Mere Naina Kafir Hogaye’ from the film, featuring Sonam and Pulkit Samrat. The song has been sung by Rahet Fateh Ali Khan, and therefore has all that a soulful track requires.
In fact, extending his support to the film—’Dabangg’ actor Salman Khan took to Twitter and shared the song. He posted: “Wah yaar kamaal kar diya makhand chand pandey n pulkku.” He even posted the link to the song.
‘Dolly Ki Doli’ is set to hit the theatres on January 23, 2015. It has been directed by debutant filmmaker Abhishek Dogra.