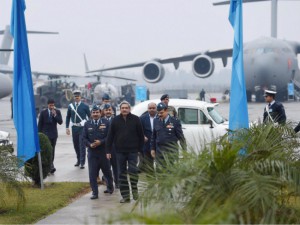 MUMBAI: Defence Minister Manohar Parrikar has reportedly alleged that “some former Prime Ministers compromised India’s deep assets” on national security, possibly referring to information sources, but he has not named anyone.
A furious Congress, which was in power for two terms till May last year, has asked the minister to either give names or apologise.Mr Parrikar reportedly made the comments while explaining why he did not want to reveal too many details about the Coast Guard operation on December 31 in which a boat from Pakistan blew up after being intercepted off the Gujarat coast.
The source of information might have been compromised, he said.”After all, you have to build deep assets. Deep assets are created over 20-30 years. Sadly, there were some prime ministers who compromised deep assets. I am not going to disclose names. Many people know,” Mr Parrikar was quoted by the news agency Press Trust of India as saying at an event in Mumbai.
Opposition parties, including the Congress, had questioned the Coast Guard operation and demanded evidence that the vessel that exploded with four men on it, was carrying suspected terrorists.

Mr Parrikar mocked the Congress for making the demand. “Tomorrow, during such an operation, we will take along a cameraman and also the Congress spokesperson. But now nothing can be said with certainty as Congress spokespersons are saying good things about the Modi government,” he said, taking a dig at Janardan Dwivedi, who is seen to have praised Prime Minister Narendra Modi in an interview.
Congress leader Manish Tewari said the Defence Minister has made a “very grave charge.”He said, “What does the defence minister mean when he accused former PM of compromising with deep assets? What sort of deep assets he is talking about? Are they strategic or are they intelligence assets? He should come out with facts if he has any else he should apologize. You can’t tar former prime ministers of India, irrespective of party, with a black brush.”