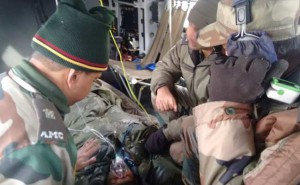 NEW DELHI: The soldier whose rescue nearly a week after a deadly avalanche at the world’s highest battlefield Siachen has been described as a miracle, is in coma and has been placed on ventilator support at a hospital in Delhi.
For six days, Lance Naik Hanamanthappa Koppad was buried under 25 feet of ice in temperatures close to minus 40 degrees.Late last night, a rescue team found him in an “arctic tent” or a fibre-reinforced hut that was buried deep in ice. He was unconscious with a faint pulse.
He was put on a rescue chopper that took off from the highest helipad on earth on the Saltoro ridge of Siachen.The jawan was trapped since February 3, when a wall of ice a kilometer wide and 800 metres high came crashing down on his army post, killing nine of his colleagues.
Prime Minister Narendra Modi, who visited him at the Army Research and Referral hospital in Delhi, tweeted: “No words are enough to describe the endurance & indomitable spirit of Lance Naik Hanumanthappa. He is an outstanding soldier.”

Finding the soldier was “nothing short of a miracle”, Lieutenant General SK Patyal told today.”A wall of snow as thick and hard as concrete had fallen on them. The operation was extremely difficult,” he said. The rescue team could not work more than 30 minutes at a time.
Five bodies have also been found after some 300 sorties and an intense search at a height of nearly 20,000 feet, where it is difficult to breathe, let alone dig.
The rescue, involving heavy equipment that had to be assembled at the top, and dogs, became particularly challenging because the snow had turned into hard chunks of ice. In temperatures between minus 40 and 25 degrees, rescue teams had to battle frequent blizzards and work through low visibility.
The Siachen Glacier located at the northern tip of Kashmir is the world’s highest and coldest battlefield. More soldiers have died here because of the weather and difficult terrain than in battle. At least 869 officers and soldiers have been killed there since the mid-1980s