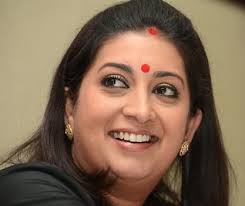 NEW DELHI : The BJP in a late night decision named actor-politician Smriti Irani as its Amethi candidate to take on Rahul Gandhi and make a match of a contest tilted heavily in favour of the Congress vice-presidentContrary to speculation, the BJP opted for a Supreme Court lawyer, Ajay Aggarwal, and not Uma Bharti, as its nominee from Rae Bareli from where Congress president Sonia Gandhi is seeking a re-election.
With the Congress making public its intention to put up a “formidable” candidate against Narendra Modi in Varanasi, the BJP decided to take the fight to the Gandhi pocket borough of Amethi.The party expects its Rajya Sabha MP to put up a “tough” fight in a likely triangular contest, in which Aam Aadmi Party’s Kumar Vishwas, a poet, is the third contestant. The Samajwadi Party, which is in power in Uttar Pradesh, has decided against fielding candidates from both Amethi and Rae Bareli.
Irani, a popular TV actor, has served the party in different capacities — national secretary, chief of women’s wing and now as a vice-president.
The 38-year-old who played Tulsi in a popular TV soap, feels the party, would not only add glamour to the poll fight, but will also have the advantage of being the only woman candidate. “She is an energetic politician, who will make a difference despite the delayed announcement of her candidature,” a BJP leader said. Amethi goes to the polls on May 7.
The party didn’t opt for Bharti from Rae Bareli as she insisted that she be allowed to fight elections from another Uttar Pradesh constituency, Jhansi, from where she had already been named. “The party was not willing to concede to her demand for contesting from two seats in Uttar Pradesh,” BJP sources said.Earlier, Bharti had flip-flopped on the party’s offer to take on Sonia, first saying she would not leave Jhansi and then declared a couple of days later that she was ready to contest from both the seats. It was his petition before the Supreme Court in the Taj corridor case that eventually led to the fall of Mayawati government, Aggarwal told reporters. The BJP’s Rae Bareli candidate also claimed he “contributed a lot in exposing the truth in Bofors scandal”.
The BJP was close to sealing an alliance with the Telugu Desam Party, which was delayed over last-minute glitches over seat-sharing. The talks with TDP were “not over” and it might take “a couple of more days”, the party said. The BJP wants to contest 40 of the 119 assembly seats and eight of the 17 Lok Sabha seats in Telangana.
“We are even ready to accept two or three Lok Sabha seats (of 25) in Seemandhra, but agreeing to anything less than 25 assembly seats (out of 175) would be not possible,” a BJP leader said. Andhra Pradesh will be holding assembly elections along with the Lok Sabha polls in two phases – 30 April  in Telangana and 7 May  in Seemandhra.