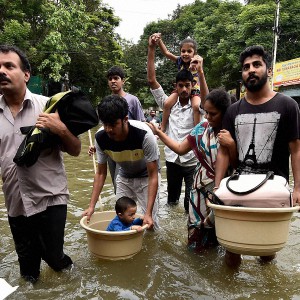 CHENNAI: Signs of easing of situation in flood-battered Chennai emerged on Friday with no fresh rains and a sharp fall in water levels of Adyar and Kumbh rivers that were in spate following torrential rains as rescue and relief operations continued in full swing and Prime Minister Narendra Modi announced a Rs 1,000 crore more aid to Tamil Nadu.
However, thousands of citizens continue to be marooned with several areas inundated and many people have been stuck in their homes without any food, water or electricity.
Chennai city and its suburbs experienced a welcome break from the unpredicted rains of the last 100 years, that resulted in a sharp fall in the discharge of waters from Chembarapakkam, Pondi and Puzhal lakes leading to reduction in the water levels of the two rivers that criss-cross the city.
After their separate aerial surveys of the flood-ravaged areas, Tamil Nadu Chief Minister Jayalalithaa met Prime Minister Narendra Modi and urged for an immediate relief of Rs 5,000 crore, to which he responded by announcing Rs 1000 crore more for relief work in Tamil Nadu. This will be in addition to the Rs 940 crore already announced by the Centre.
Officials said that from a discharge of 30,000 cusecs of water from Chembarampakkam, one of the key sources of drinking water supply to Chennai city, it has come down to 13,000 cusecs in the afternoon and 5,000 cusecs at night after there were no fresh rains today.
Similarly, there has been considerable decline in discharge of water from Puzhal, Pondi and Madurantakam lakes among others.The reduction in water levels of Adyar and Kumbh rivers are likely to ease the situation in the city where flood waters are also likely to recede.