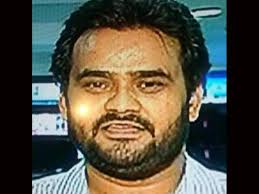 NEW DELHI: A day after investigative journalist Akshay Singh suddenly died while interviewing family of a Vyapam scam accused in Madhya Pradesh, state Chief Minister Shivraj Singh Chouhan reportedly said that he will ask Vyapam scam SIT to probe the incident.
“I will write to SIT probing Vyapam scam to investigate the death of the television journalist,” said Chouhan.Calling Akshay’s death as “extremely unfortunate”, the Madhya Pradesh CM assured that strict action will be taken against those found guilty.
Meanwhile, the body of deceased journalist will be brought to Delhi on Sunday.The last rites of the slain journalist will be performed at Nigam Bodh Ghat today afternoon.
“My condolences on sad & untimely demise of young journalist Akshay Singh. My thoughts & prayers are with the bereaved family,” he tweeted.
Akshay Singh, a journalist with TV Today Group, died suddenly yesterday when he had gone to take an interview of the family of a slain Vyapam scam accused in Jhabua district of Madhya Pradesh.

Reports say that Singh felt chest pain when he was taking the interview. He was taken to Meghnagar hospital where he was declared brought dead.Medical Doctor, Dahod Civil Hospital, Dr Ashok Bachani had said that the post mortem report of Akshay Singh did not show any foul play.
“To determine the reason behind death, we have sent viscera for histopathology and forensic analysis. After reports come in, we’ll be able to give the reason behind his death,” Dr Bachani added.

After 44 deaths in two years in the mysterious Vyapam scam, Congress general secretary Digvijaya Singh had earlier asked for a Central Bureau of Investigation (CBI) probe under the monitoring of Supreme Court.
The Congress leader had filed a petition in the apex court, seeking an SC-monitored CBI investigation into the Vyapam scam, which has snowballed into a huge mystery.
The Special Investigating Team (SIT) probing the scandal had submitted to the MP High Court that 23 deceased in the MPPEB scam had died unnatural deaths so far.
Refusing to order a probe by the Central Bureau of Investigation (CBI) into the deaths, Madhya Pradesh Home Minister Babu Lal Gaur claimed that the deaths have no connection to the Vyapam scam.
The most high-profile death in connected with case has been that of Shailesh Yadav, son of Madhya Pradesh Governor Ram Naresh Yadav. Shailesh (50) was found dead at his father’s residence in Mall Avenue area of Uttar Pradesh capital Lucknow on March 25, 2015.