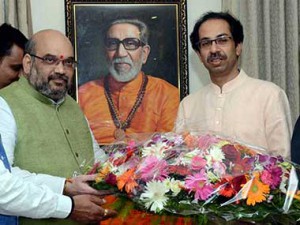 MUMBAI: Shiv Sena chief Uddhav Thackeray may have attended Maharashtra Chief Minister Devendra Fadnavis’ swearing-in ceremony on Friday after receiving a call from BJP president Amit Shah, but his party is reported to have now set a deadline for the BJP to decide on whether to forge an alliance.
Reports said that the BJP has been asked by the Shiv Sena to take a final call on alliance before the vote of confidence. And that could happen on November 15, as Maharashtra Governor C Vidyasagar Rao has given Fadnavis’ minority government 15 days to hold a trust vote.
Shiv Sena sources say if the BJP fails to finalise a deal by then, the party will not support the new government during the trust vote.The Shiv Sena, meanwhile, is believed to have agreed to the 2:1 formula of representation in the government, whereby the Maharashtra party will have one minister for every two of the BJP.
However, as per sources the party is reportedly demanding the post of deputy chief minister in the government.
Also, the Fadnavis government is expected to have 32 ministers out of which the BJP will have 20 and the Shiv Sena 10 (5 of Cabinet rank and 5 Ministers of State).Two remaining ministerial berths will be shared by the smaller allies.

The BJP with 121 seats needs at least 24 more to win the vote of confidence in the 288-member House. The party had originally won 122 seats but one of its MLAs died after the results were announced, bringing down the tally to 121. The party has now claimed support of all seven independent MLAs and some from smaller parties.

The Shiv Sena, with 63 seats, is an ideal partner. However, the BJP already has an offer of outside support from the NCP, which has 41 seats. The NCP has said that it would abstain during the trust vote to help the BJP government.
While delaying a decision on alliance, the BJP has indicated that it is in favour of truck with the Shiv Sena.
“Uddhav Thackeray’s attendance today was a big gesture. Talks are moving in the right direction,” Fadnavis had said after his swearing-in yesterday.The small size of his Cabinet also indicates that the BJP is ready to accommodate allies.
The two parties were in alliance till the announcement of polls but had parted ways in September after failing to agree on seat-sharing.
Meanwhile, Fadnavis this morning met his Cabinet ministers to discuss portfolio allocation. Also on agenda of the meeting was alliance with the Shiv Sena, but no details of the meeting were available.