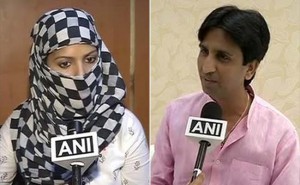 NEW DELHI: The Delhi Commission for Women has summoned Aam Aadmi Party leader Kumar Vishwas and his wife on a complaint by a woman volunteer of his party, who wants him to make a public clarification that they were not in an “illicit relationship” while campaigning for last year’s national elections.
Mr Vishwas has alleged “character assassination” and accuses political rivals of trying to malign him and his party. “Na hum sahib se darenge na sahib ki party se darenge (Neither sahib nor his party intimidates us),” he said, referring to Prime Minister Narendra Modi and his party, the BJP.
The woman volunteer alleges that her reputation has been tarnished and she has been abandoned by her husband after she was falsely accused of having an affair with Mr Vishwas. This followed rumours, she said, that the AAP leader’s wife found him in a “compromising position” with a woman in Amethi, Uttar Pradesh, where he contested against Congress vice-president Rahul Gandhi.

The woman alleges Mr Vishwas has ignored repeated requests to make a public denial. “I have just asked him to come forward, make it clear publicly that nothing happened between us, why can’t he do that?” she asked, adding, “I’m neither the BJP’s agent nor the Congress’.”
The commission, which is headed by Barkha Singh of the Congress, has said it has summoned Mr Vishwas tomorrow as “now it is a matter of her respect.”Kumar Vishwas said the police must help the woman against those maligning her. “She wrote to me saying ‘Bhaiya‘ (brother) I’ve filed an FIR, what should I do next? We told her to consult the AAP legal cell,” he said.
As the Congress and the BJP rushed to attack AAP, Mr Vishwas has threatened to sue for defamation.His party’s Sanjay Singh said, “Please don’t malign our families. Please spare our families from these unsubstantiated, baseless stories. It pains us and our families.