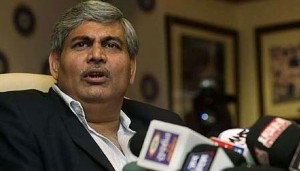 MUMBAI: In order to select its new president post the sudden death of Jagmohan Dalmiya, the Board of Cricket for Control in India (BCCI) has called its Special General Meeting (SGM) in Mumbai on Sunday.
Apprising media of the development, BCCI Secretary Anurag Thakur said the meeting will be held in Mumbai and scrutiny of the nominations will be done on October 3.”Shashank Manohar is our consensus candidate,” Thakur told media, adding that if an election happens, “N Srinivasan can come and vote at the SGM”.
The Supreme Court hearing on Srinivasan’s eligibility on attending BCCI meeting is slated for October 5.Thakur said Srinivasan can not attend the meeting but he was not barred from casting his vote.

The 57-year-old former president emerged as the favourite for BCCI’s top post – for a second stint -after Thakur and some other top officials belonging to Sharad Pawar faction earlier had a meeting with Union Finance Minister Arun Jaitley to find a consensus candidate for the President’s post following the death of Dalmiya.

Thakur, along with former BCCI president Manohar and former treasurer Ajay Shirke, met Jaitley at his residence on Thursday night and discussed the way forward to break the leadership stalemate.
With the news of a possible alliance between former BCCI presidents and known foes Sharad Pawar and N Srinivasan gaining momentum, the Thakur faction have also started back channel talks with key members of the Pawar faction.
In fact Manohar and Shirke, two of the most vocal members of the anti N Srinivasan faction, flew to Delhi on Thursday evening to not only meet Jaitley but also hold discussions with other key BCCI officials.
“Yes, there was a meeting that took place at Mr Jaitley’s residence. Manohar and Shirke spoke at length about the current situation of BCCI with Mr Jaitley.Thakur was also present”, a top BCCI official told PTI on condition of anonymity.
It is learnt that Manohar, the Vidarbha-based lawyer was offered the BCCI president’s post for his clean image and being a crusader of anti-corruption in the board but apparently he declined the offer.
“Manohar has always maintained that he has played his innings as BCCI top boss. He does not wish to come back again but is ready to help the BCCI restore its faith among stakeholders. He has made it clear that he is not at all in favour of a Pawar-Srinivasan alliance,” the source said.
It is learnt that both Jaitley and Thakur requested Manohar and Shirke to convince Pawar to stay away from Srinivasan’s faction.Sourav Ganguly, who was recently appointed as the new president of Cricket Association of Bengal (CAB) by state chief minister Mamata Banerjee, is also said to be backing Manohar for the post.
Earlier, in an interesting move, former BCCI chief N Srinivasan went to Nagpur to meet Pawar to possibly strategise about the upcoming meet.If there is more than one candidate in the fray , it will go into an election and the president who will take over will stay in charge till 2017.