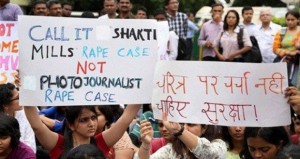 MUMBAI: Bombay High Court on Monday posted for hearing on 17 July a petition seeking confirmation of the capital punishment awarded to three youths who are common convicts in two cases of gangrape on the Shakti Mills premises in 2013.
The petition, filed by the state government, came up before a bench of Justices Vijaya Tahilramani and Ajay Gadkari who decided to hear it after a month. As per the law, a death sentence awarded by the trial court has to be confirmed by the high court.
On 4 April, 2014, a sessions court had convicted Vijay Jadhav (19), Mohammad Kasim Bengali (21), Mohammad Salim Ansari (28) and Siraj Khan for raping a photojournalist on the deserted premises of the defunct Shakti Mills in Central Mumbai on 22 August , 2013.
While Siraj was awarded life imprisonment, the other three were awarded death penalty under the provisions of section 376 (e) of Indian Penal Code, which provides for maximum sentence of death for a repeat offence of rape. Jadhav, Bengali and Ansari were earlier convicted and sentenced to life imprisonment by the court for gangrape of a young telephone operator on the same premises in July, 2013.
Hence the prosecution sought death penalty for them in the second case by framing an additional charge of repeat offence under section 376 (e), which was introduced in the IPC after the December 2012 Delhi gangrape. This is the first time the section has been applied.
The session’s court, while awarding the death rap, had observed that the offence was a pre-planned one, and the accused showed no mercy to the victim and had no remorse afterwards. ”Such offences must not be tolerated and there should be a zero tolerance to such crimes. If leniency is shown it will be misplaced sympathy and travesty of justice,” the court had said.