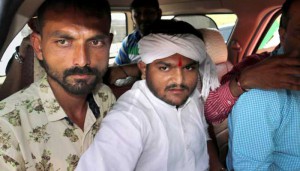 AHMEDABAD:Hardik Patel, the 22-year-old leader of the reservation movement for Patidars, was booked for sedition after he was caught on camera purportedly asking his supporters to kill policemen rather than commit suicide for the cause of reservation.

An FIR was lodged against him in Surat late last night. “Sedition case filed against Hardik Patel in Surat,” said Surat Commissioner Rakesh Asthana.
The Gujarat Police claimed that it has verified the authenticity of the tape and said it was not ‘doctored’. This after Patel alleged that his comments were misinterpreted, while also questioning the authenticity of the tape.
Hardik is already under detention in Rajkot after he was booked for insulting the national flag. He was in Rajkot to stage a protest during the India-South Africa One Day International.
Earlier, his brief detention at Ahmedabad on August 25 had led to violence in many parts of the state.