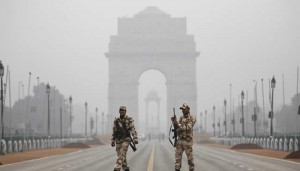 NEW DELHI: Security agencies have warned about a possible 26/11 style influx of terrorists from the sea and an attack on BJP offices, asking the forces to remain alert on the occasion of Independence Day to thwart any such attempt.
The Home Ministry has also cautioned that the terrorists might use the air route to strike using a para gliders to attack and has asked the security forces to remain vigilant against any such attempt to sabotage, especially targeting high risk dignitaries.
The advisory said that recent terror attack in Gurdaspur, several terror incidents in the past including serial blasts in Patna in 2013 targeting election rally of Narendra Modi indicated that threat emanates from Pakistan based terrorist groups and their Indian affiliates like the Indian Mujahideen and members of ex-SIMI to possible targets like Lotus Temple, Malls in Noida, Metro Stations, Red Fort and Political Personalities.
In a communication to all the forces and state police the Ministry has cited an April 16 input suggesting that Al Qaeda in the Indian Sub-Continent (AQIS) was actively engaged in planning attack against India at Indian Naval facilities and other unsecured waterfronts as potential target.
“In this regard the Southern Naval Command in Kochi (INS Venduruthy), Western Naval Command in Mumbai and the Naval base in Karwar (INS Kadamba) could be targeted,” it said adding that Gujarat may also be targeted.
The communication said an input received in September last year claims that AQIS has been planning to target BJP offices, commercial, tourist, religious, aviation and railway infrastructure in various states.
“To counter threat from remote pilotless vehicles, remote controlled aircraft, para gliders and hang gliders, open grounds and spaces, abandoned air strips etc allowing lift off or launching pads for these flying objects need to be identified and suitably secured by patrolling and deploying of security forces.
According to another uncorroborated input the ISI has “plan to hijack/explode Air India flights operating in Kabul-Delhi sector as they are being used by senior Indian officials.”
The forces guarding the Indo-Nepal and Indo-Bangla border, SSB and BSF respectively, have also been asked to remain on high alert following intelligence input that terrorists might also use these routes to infiltrate in the country to create disturbance on 69th Independence Day, official sources said.