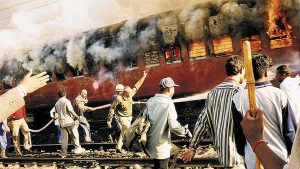 NEW DELHI : India on Thursday dismissed a controversial BBC documentary series on Prime Minister Narendra Modi and described it as a “propaganda a piece” that is designed to push a discredited narrative. Addressing a weekly media briefing External Affairs Ministry Spokesperson Arindam Bagchi asserted that this documentary show, based on some internal UK report, shows the colonial mindset. The foreign ministry on Thursday dismissed a BBC documentary on Prime Minister Narendra Modi which questioned his leadership during the 2002 Gujarat riots as “propaganda”.
Modi was the chief minister of the western state of Gujarat when it was gripped by communal riots that left more than 1,000 people dead – most of them Muslims. The violence erupted after a train carrying Hindu pilgrims caught fire, killing 59. Accused of failing to stop the rioting, Modi denied the accusations and was exonerated in 2012 following an inquiry by India’s top court. Another petition questioning his exoneration was dismissed last year.
The Supreme Court in June 2022 said that there was “no larger conspiracy behind Gujarat riots.” The top court rejected murdered ex-MP Ehsan Jafri’s wife, Zakia Jafri’s plea against the clean chit given to Modi by the Special Investigation Team (SIT). The Supreme Court also said that “(Charge) of larger criminal conspiracy at highest level stands collapsed like a house of cards”.
Terming the BBC documentary a “propaganda piece” meant to push a “discredited narrative”, foreign ministry spokesperson Arindam Bagchi said a “bias”, “lack of objectivity”, and “continuing colonial mindset” is “blatantly visible” in it. “It makes us wonder about the purpose of this exercise and the agenda behind it, and we do not wish to dignify such efforts,” he told a news conference. The BBC, contacted for comment, said the documentary was “rigorously researched” and involved a “wide range” of voices and opinions, including responses from people in Modi’s Bharatiya Janata Party (BJP).”We offered the Indian Government a right to reply to the matters raised in the series – it declined to respond,” a BBC spokesperson said.
A BBC documentary, ‘India: The Modi Question,’ looks at “the tensions between India’s Prime Minister Narendra Modi and the country’s Muslim minority”, as well as “investigating claims” concerning his role in the large-scale communal violence that erupted in Gujarat in the months of February and March, in 2002 that left “over a thousand dead.”
The violence followed the burning of a train at Godhra on February 27, 2002, carrying kar sevaks which led to 59 deaths. Parliament in 2005 was informed that in subsequent violence, 790 Muslims and 254 Hindus were killed, 223 more people were reported missing and another 2,500 injured.
In the first part of a new series aired in the United Kingdom on BBC Two on Tuesday evening, a UK government report, earlier marked as “restricted”, that has never been published or revealed so far, has been shown in detail. The documentary has a series of images of the text of the report, and in one s

tatement, the inquiry report says that “Narendra Modi is directly responsible”. It refers to the chain of events as a “systematic campaign of violence” which has “all the hallmarks of ethnic cleansing.”

The report is a result of an inquiry set up by the UK government, which was “alarmed” by what had happened in Gujarat. “I was very worried about it. I took a great deal of personal interest because India is an important country with whom we (the UK) have relations. And so, we had to handle it very carefully,” recalled former foreign secretary, Jack Straw (2001-2006), on camera, in the documentary. “What we did was establish an inquiry and have a team go to Gujarat and find out for themselves what had happened. And they produced a very thorough report.”
A report given to the UK government by the inquiry team mentioned that the “extent of the violence was much greater than reported” and there was a “widespread and systematic rape of Muslim women” as the violence was “politically motivated.” It further stated that the riots aimed to “purge Muslims from Hindu areas.” “That undoubtedly came from Modi,” the documentary alleged. In the documentary, a former British diplomat, who remains anonymous said, “At least 2000 people were murdered during the violence where the vast majority were Muslims. We described it as a pogrom – a deliberate, and politically driven effort targeted at the Muslim community.”
The Vishwa Hindu Parishad (VHP), an affiliate of the Rashtriya Swayamsevak Sangh (RSS), also finds mention in the report. The former diplomat said; “The violence was widely reported to have been organised by an extremist Hindu nationalist group – the VHP.” The VHP and its allies could not have done so much damage without “the climate of impunity created by the state government,” the report states. The documentary alleged that “there was a culture of impunity that created the environment for the violence to take place.”
“These were very serious claims – that Chief Minister Modi played a pretty active part in pulling back the police and in tacitly encouraging the Hindu extremists,” Former British Foreign Secretary Straw told the BBC. These allegations, he says, against Modi were shocking and have set a “particularly egregious example of political involvement” by preventing police from doing their job to protect communities. He further confessed that he was left with “fairly limited” options as a minister. “We were never going to break diplomatic relations with India, but it is obviously a stain on his reputation.”
Following the 2002 Gujarat riots, the British government slapped a diplomatic boycott on Modi for his claimed failure to put an end to the bloodshed. It ended in October 2012. During the same time, according to the BBC, an inquiry was also set up by the European Union, which also carried out an investigation. It reportedly found that “ministers took an active part in the violence and the senior police officers were instructed not to intervene in the rioting.”
“Narendra Modi does not tend to be very media friendly. So, for him to agree to do a sit down interview with us, felt like a bit of a scoop. He struck me as a very charismatic, very powerful and quite menacing figure,” says BBC’s Jill McGivering, who interviewed Modi on the violence. In a response to her questions around “repeated violence” and Gujarat being in turmoil following the outbreak of violence, Modi is shown to respond with, “I think you have to correct your information first. The state is very peaceful.” On further questions over his allegedly mishandling law and order management in the state, he said, “This is absolutely misguided information and I do not agree with your analysis.” “You British should not preach us human rights.” However, when asked if there was anything in the entire episode that Modi would like to do differently, Modi said: “One area where I could have done things differently is — how to handle media.” The UK inquiry report cited in the documentary concluded, “While Modi remains in power, reconciliation will be impossible.”
(Bureau Report with The Wire Inputs).