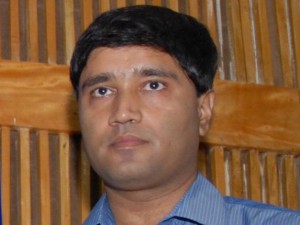 NEW DELHI: Whistleblower bureaucrat Sanjeev Chaturvedi and human rights activist Anshu Gupta are among five persons from India, Laos, Myanmar, and the Philippines who will receive Asia’s coveted Ramon Magsaysay Award.
In a statement issued early on Wednesday morning, the Board of Trustees of the Ramon Magsaysay Award Foundation (RMAF) announced five awardees.”Thank you; this is a great honour. I’m speechless; it seems honesty and one’s struggle for justice don’t go unnoticed,” Mr. Chaturvedi told The Hindu confirming the development.
The 2002-batch Indian Forest Service officer, who is currently embattled in a protracted battle with the Centre over alleged harassment for his tough stance on graft, was the former Chief Vigilance Officer (CVO) at the AIIMS in New Delhi.

According to the foundation, Mr. Chaturvedi has been awarded for “his exemplary integrity, courage and tenacity in uncompromisingly exposing and painstakingly investigating corruption in public office, and his resolute crafting of program and system improvements to ensure that government honorably serves the people of India.”
‘Recognition for cloth as a charitable product’
Anshu Gupta, the founder of NGO Goonj, the statement said, is being recognised for “his creative vision in transforming the culture of giving in India, his enterprising leadership in treating cloth as a sustainable development resource for the poor, and in reminding the world that true giving always respects and preserves human dignity.”
Mr. Gupta, who left his corporate job to start the non profit organisation Goonj in the year 1999, is an elated man today.Talking to The Hindu, Mr. Gupta said: “It’s definitely a great recognition for me and my team. It has been a beautiful journey working for Goonj. I am happy that we have been able to change many lives in the course of time.”
“Now I feel that what we are trying to do is going in the right direction. I feel that finally cloth has been recognised as a charitable product,” he added.
On being asked about his future ventures after this he said: “We will just continue to do the kind of work that we are doing. I don’t think there will be any change in the way me or my team operates. People might start looking at us in a different way but that’s a separate thing.”
Goonj is a non-governmental organisation based in Delhi, which works in 21 states across India in disaster relief, humanitarian aid and community development. It has converted 1,000 tonnes of used clothes, household goods and other urban discards into usable resources for the poor.“I never worked on target, I tried to utilise the maximum potential,” Mr. Gupta said.
Other awardees
The other awardees are Kommaly Chanthavong, from Laos who is being recognised for her efforts to develop the ancient Laotian art of silk weaving, Ligaya Fernando-Amilbangsa from the Philippines for “her single-minded crusade in preserving the endangered artistic heritage of southern Philippines”.
Kyaw Thu from Myanmar, the statement said, was being recognised for “his generous compassion in addressing the fundamental needs of both the living and the dead in Myanmar — regardless of their class or religion — and his channeling personal fame and privilege to mobilize many others toward serving the greater social good.”

This year’s Magsaysay Award winners will each receive a certificate, a medallion bearing the likeness of the late President, and a cash prize to be conferred upon them during a formal Presentation Ceremony to be held on August 31 2015 at the Cultural Center of the Philippines in the Capital.