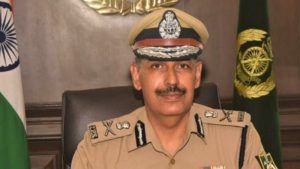 NEW DELHI : Sanjay Arora, a 1988-batch IPS officer of Tamil Nadu cadre, has been appointed as Commissioner of Police of Delhi. Sanjay Arora is currently serving as the Director General (DG) of Indo-Tibetan Border Police (ITBP). Arora will succeed Rakesh Asthana, a Gujarat-cadre IPS officer. According to an official order, the competent authority has approved the inter-cadre deputation of Arora to the AGMUT cadre.

An official notification by the Ministry of Home Affairs said on Sunday that, “Police Division, MHA vide OM No.l-21019/09/2022-IPS.III dated 31.07.2022 has conveyed the approval of the Competent Authority for intercadre deputation of Sh. Sanjay Arora, JPS (TN: 1988) from Tamil Nadu Cadre to AGMUT Cadre.
“In pursuance of the said approval, Sh. Sanjay Arora, JPS (TN: 1988) is hereby appointed as Commissioner of Police, Delhi with effect from 1st August, 2022 or from the date of taking over charge whichever is later and till further orders,” it further said. No AGMUT for Delhi CP Again: Meet Sanjay Arora, Who Won Bravery Award for Action against Veerappan Gang Consequently, SL Thaosen, the Director General of Sashastra Seema Bal (SSB), has been given additional charge of DG ITBP till the appointment and joining of the regular incumbent or until further order, MHA said.

WHO IS SANJAY ARORA?
Sanjay Arora graduated with a bachelor’s degree in Electrical and Electronics Engineering from Malviya National Institute of Technology in Rajasthan.After joining the IPS, he served in various capacities in the Tamil Nadu Police. He was the Superintendent of Police (SP), Special Task Force, where he achieved significant success against the Veerappan gang, for which he was awarded the CM’s Gallantry Medal for Bravery and Heroic Action.
He served as Commissioner of Police, Coimbatore city from 2002 to 2004.
He has also served as Deputy Inspector General of Police, Villupuram range and Deputy Director of Vigilance and Anti-Corruption. He has led the Chennai City Police as Additional Commissioner Crime & Headquarters and Additional Commissioner Traffic. On promotion, he was appointed as ADGP (Operations) and ADGP (Administration) in Tamil Nadu Police.He also served in the Indo-Tibetan Border Police (ITBP) on deputation as

Commandant from 1997 to 2002. He commanded a border guarding ITBP Battalion in Matli, Uttarakhand from 1997 to 2000.
Arora  also served as the Inspector General (Special Operations) BSF, IG Chhattisgarh Sector CRPF and IG Operations CRPF. He has served as ADG HQ & Ops CRPF and Spl DG J&K Zone CRPF before being appointed as DG, ITBP. He assumed the charge of DG ITBP on 31 August, 2021 as the 31st Chief of the Force. He was awarded the Police Medal for Meritorious Service in 2004, the President’s Police Medal for Distinguished Service in 2014, the Police Special Duty medal, Antrik Suraksha Padak and the UN Peacekeeping medal, among others.
NO EXTENSION FOR FORMER COMMISSIONER
Sanjar Arora’s appointment letter by the Ministry of Home Affairs quashed rumours that emerged on Saturday that former commissioner Rakesh Asthana was given an extension for six months. Arora’s colleagues said his appointment as the Delhi Police commissioner will boost its morale adding that the force will get a “professional, no-nonsense and uncomplicated officer”.
(With Media Report).