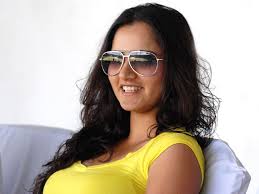 NEW DELHI: Indian tennis ace Sania Mirza on Tuesday returned to Hyderabad to a huge welcome after winning yet another women’s doubles title.
Hundreds of fans turned up at the airport to welcome Sania, who won the second mixed doubles title of the year along with her Swiss partner Martina Hingis at the US Open 2015.Sania, who was recently awarded with the Rajiv Gandhi Khel Ratna Award, dedicated her title to the people of India.
“I always dedicate it back to India. I always dedicate it back to the people. I have said it many times. I have gotten a lot from the love that I keep getting everytime I go. Al the wishes. So again, I give it back to the people of India. Everyone has rejoiced again,” she said.

After winning the Wimbledon earlier this year, Martina-Sania pair won their second consecutive Grand Slam women’s doubles crown on Sunday, defeating Casey Dellacqua and Yaroslava Shvedova 6-3, 6-3 in the US Open final.
They did not drop a set in becoming the first top-seeded duo to win the US Open women’s doubles title since Cara Black and Liezel Huber won the 2008 crown.The 28-year-old said that now she was looking forward to her sister Anam’s engagement.
“Winning the US Open was great but the attention, focus is something totally different now. We are really excited. I am coming here almost like I was invited to the engagement but I had no choice, I had a good enough reason. I am looking forward to the next couple of days,” she said.
Sania was an unanimous choice for the country’s highest sporting award but a controversy triggered after paralympian H Girisha went to the court and questioned if the tennis queen was indeed deserving.