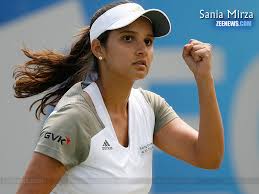 BANGALORE: In a significant development, Sania Mirza has agreed to play in the upcoming Asian Games, two days after AITA announced that they would allow top players to miss the Incheon event, keeping in mind their requirements on the professional circuit. Sania’s decision means that the Hyderabadi has put on line 900 ranking points, which she had to defend on the tour during the period of the Asian games, to be held from September 20-30.
Sania will miss the Wuhan WTA event which has 900 points on offer. She though will play in Tokyo, where she is defending champion but now points in that tournament have been reduced to 475 from 900. “I was feeling weird, I was not feeling happy with my decision, so I thought I will play.
She says I know I am sacrificing 900 points, but sometimes you have to take a decision,”  before leaving for Tokyo. After the Games, Sania will compete in China Open, starting September 29. Sania and Cara Black are fourth in the Race to Singapore, the year-end championship but the Indian hoped that she will be able to earn enough points in Tokyo and Beijing to remain in top-8. Asked if there was any pressure on her, the US Open mixed doubles champion replied in a negative. “No there was nothing like that.
I hope we come back with a medal, I know the chances are less in both mixed and women’s doubles but I will give my best shot,” the 27-year-old said. Asked if Indian team’s participation was in jeopardy in the wake of mass pull outs of top players and that forced them to convince Sania to play, AITA President Anil Khanna said there was no pressure on them from the government. “I can only say that government did not say anything to us. Yes, she is playing. It’s a good news,” Khanna said. Leander Paes, Rohan Bopanna and Somdev Devvarman have all been allowed by AITA to play on the professional circuit instead of the Asian Games to defend points in the next few weeks.
“This is my bread and butter and at the end of the day my ranking has dropped to 35 in the world. Hence I have to get some job security for next year. I have to play a long fall season, through Kuala Lumpur as well as Tokyo, these two tournaments are the exact dates in the nine-day span of the events in Asian Games,” Paes had said while speaking to media ahead of the Davis Cup tie against Serbia.