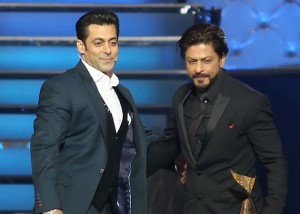 MUMBAI: Looks like actor Salman Khan has given his final word on his relationship with actor Shah Rukh Khan. Salman, who is currently the host of Bigg Boss 8 said that Karan Arjun have parted ways commenting tangentially on his equation with SRK.
Actress Sukirti Kandpal, who rose to fame with TV Show Pyaar Ki Ek Kahani, was the second celebrity to be eliminated from the controversial reality show Bigg Boss. The actress was quite friendly with actors Upen Patel and Aarya Babbar on the show, whom she had nicknamed Karan Arjun. After her elimination, when Salman quizzed whom she liked better, Sukirti said that both actors are quite close because of which she had given them the said name.
But Salman, being the ‘devil’, took a snide at Sukirti’s comment and said, “Ye Karan Arjun ab saath nahi hai“. He took a dig at his ‘frienemy’ Shah Rukh Khan, saying that Karan Arjun have parted ways and are no longer together.
Sukirti, who was either feigning innocence or did not want comment on either of the Khans, continued talking about Aarya and Upen saying she likes them both. But even before she could complete her sentence Salman cut her across saying, “You like both Shah Rukh and Salman?”But the Kick star did not stretch the discussion further and engaged in a group chat with the housemates.
Salman Khan and Shah Rukh Khan’s relationship soured after a fight at actress Katrina Kaif’s birthday party. However the two actors reportedly ‘hugged’ out their differences twice at an Eid party hosted by their common acquaintance. The two stars also shared a cordial vibe at an award show last year which was hosted by SRK and Salman was one of the awardees.
However, during his Koffee With Karan debut Salman Khan (who ‘coincidentally’ also took Shah Rukh’s season debut slot) said that the two Khans may never be the best of friends again but they will maintain an affable relationship with each other. In fact, Shah Rukh’s wife Gauri has represented her husband at Salman Khan’s parties and family events in the past few years.
Further, during the launch of Bigg Boss, Salman Khan had said that he would invite SRK’s team of Happy New Year for the promotions – an invitation which was in genuinely accepted by King Khan. He had said that Salman Khan has been “gracious” about the film.