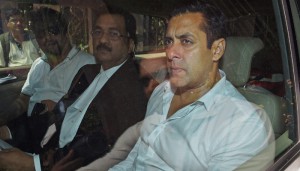 MUMBAI: A sessions court judge D W Deshpande will announce the date of judgement in the infamous 2002 hit-and-run case involving Bollywood superstar Salman Khan, tomorrow.Earlier, a trial court Saturday said it would fix on April 20 the date for pronouncement of judgement in the 13-year-old hit-and-run case in which Khan is an accused. But the court will announce the date on Tuesday.
No further time would be given either to the defence or prosecution to make more submissions, the judge said last week.The prosecution has already argued its case.
Altogether 27 witnesses were examined by the prosecution while the defence examined only one witness — Khan’s driver Ashok Singh.The 49-year-old actor is accused of ramming his Toyota Land Cruiser into a bakery in suburban Bandra on September 28, 2002, killing one person and injuring four others.
He has been charged with ‘culpable homicide not amounting to murder’ which attracts ten years imprisonment.The sessions court is conducting a fresh trial. Earlier, the magistrate’s court was trying Khan for the lesser charge of rash and negligent driving, which attracts two years jail term.
However, mid-way during the trial, the magistrate felt that the charge of ‘culpable homicide not amounting to murder’ should be added, and he referred the case to the sessions court as the offence is not triable by a lower court.