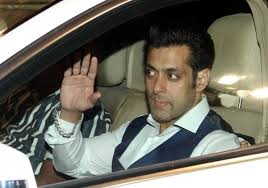 NEW DELHI : A new angle to the prolonged trial of actor Salman Khan’s 2002 hit-and-run case has come to light.According to latest reports, the witness confirmed in his statement to the court that Salman was on the driving seat, while leaving the hotel premises on that ill-fated night.
The 48 year-old actor is accused of driving his SUV onto a pavement in Bandra Sep 28, 2002, leading to the death of one person and injuries to four others.On Dec 5, 2013, a Mumbai court ordered a retrial in the case which is now underway in the sessions court.
On June 23 2014, during the retrial of the infamous case, a manager of liquor bar in Juhu had identified Salman Khan saying the actor had come to the restaurant with friends hours before his car was involved in an accident in 2002, but said he was not sure whether the Bollywood actor had taken drinks himself or not.