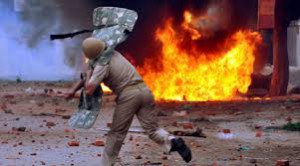 LUCKNOW: : The Uttar Pradesh police is now taking the help of drones to monitor the situation in Saharanpur after violent clashes between two groups over land dispute killed three people and injured 19 others, as per news reports on Sunday.“The lanes here are as narrow as three to four feet where it is not possible for police officials to enter. The rioters are taking advantage of that and escaping from such lanes. Drones will help in keeping an eye on such areas and nabbing these miscreants,” said Alok Sharma, Inspector General, Meerut Zone.
Bhuvnesh Kumar, Secretary in UP govt, said that a meeting to review the situation will take place in the afternoon and then a decision to lift the curfew will be taken.While Union Home Minister Rajnath Singh is currently visiting Prime Minister Narendra Modi at his residence to apprise him of the situation in Saharanpur, a meeting senior IAS and IPS officials is underway to assess the situation.
Essential supplies including water, food, ambulance, milk are being provided to the people who are stranded in their houses.
“38 persons have been arrested in connection with the incidents of violence,” Saharanpur District Magistrate Sandhya Tiwari.She further added that the situation is moving towards normalcy.While curfew has been imposed in six police station areas, shoot-at-sigh orders continue to be in force.
“The situation is under control now,” said Rajesh Kumar Pandey, SSP Saharanpur.Saharanpur District Magistrate Sandhya Tiwari said that no new incidents of violence have taken place.“No incident of violence has taken place. Curfew is likely to be called off after discussion,” Tiwari said.Commenting on the issue of land dispute, Tiwari said, “I’m not going into it… The construction is on hold.
Curfew is still on in Saharanpur, a day after violent clashes between two groups that killed three and injured 33, including policemen.38 people have been arrested in connection with the incident and nine FIRs registered, Saharanpur District Magistrate Sandhya Tiwari said today.”No major incident has taken place today. We will hold a meeting in the evening to decide on relaxing the curfew. Schools will be closed for the next three days,” Ms Tiwari added.The clashes broke out in the wee hours on Saturday after members of the Sikh community began construction on a disputed piece of land on Friday evening, which was opposed by local Muslims.
Both sides indulged in arson and opened fire. Police had to fire rubber bullets to rein in the rampaging mobs.Around 2000 paramilitary personnel are on the ground. Unmanned aerial vehicles have also been deployed to keep a close watch on the situation.Political parties, meanwhile, blamed each other for the violence. “In UP, there is no place for communalism, anti-social elements… if Opposition tries to politicise this, then law will take its own course,” said Rajendra Chaudhary, the spokesperson of the ruling Samajwadi Party.”Akhilesh Yadav has failed to run a good government… they have developed a habit of blaming BJP,” retorted the party’s Shahnawaz Hussain.

Meanwhile, a high-level meeting of senior IAS and IPS officials took place to work on a plan to bring the situation under control.Even as the situation continues to be tense in Saharanpur on Sunday, a red alert has been issued in Yamunanagar where movement of buses has been restricted.At least 6,000 para-military forces were rushed to the area after Union Home Minister Rajnath Singh reportedly spoke to Uttar Pradesh Chief Minister Akhilesh Yadav.
Around 18 companies of additional force including eight of PAC, six of CRPF ,two of RAF and two of ITBP were reportedly deployed in the troubled areas.
The clashes started on Friday after a group objected to the construction work by the members of another community.It soon turned violent after both sides indulged in firing, brick-batting and arson, the police said.The district administration on Saturday issued shoot-at-sight orders and imposed curfew under Section 144 after mob indulged in arson.