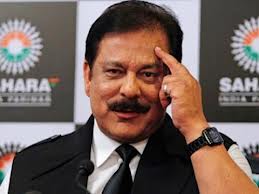 LUCKNOW : Sahara chief Subrata Roy was today arrested in Lucknow following Supreme Court’s warrant against him for not appearing in court in a case linked to his alleged failure to return investors’ money.”This is the best honour my country could give me,” was his message, read out by son Seemanto after the arrest. He said his father had surrendered as a law abiding citizen.
Mr Roy will remain in custody till March 4 as the court refused to take up his plea against the warrant today, saying there is “no urgency.””The Sahara chief is very attached to his mother; her condition remains fragile and he was hoping for a Supreme Court relief,” said Seemanto Roy in Delhi. This morning, Mr Roy had declared he was “not absconding”, rejecting speculation after a police team that landed with a non-bailable warrant at his sprawling residence last evening couldn’t find him.

“With folded hands and all humility I ask the honourable judges to leave me under house arrest with my ailing mother till March 3,” Mr Roy said in an emotional two-page statement. He said he “can’t handle this level of agony and humiliation” and accused the media of indulging in “bullying and character assassination.”
On Thursday, a team of six cops searched Mr Roy’s premises for two hours. His 92-year-old mother was at home, the cops said, surrounded by a team of doctors, but Mr Roy was not.
The Sahara chief said today that he was out consulting doctors on his mother’s medical reports and then meeting lawyers at the time. He has repeatedly cited his mother’s illness as a reason for not appearing in court.Market regulator Sebi has accused Mr Roy and three other Sahara directors of not refunding crores to millions of investors in two Sahara companies. Sebi alleges that the funds were raised illegally. In August 2012, the Supreme Court ordered Sahara to refund the money with interest.Sahara claims it has refunded the money, Sebi rejects that claim.