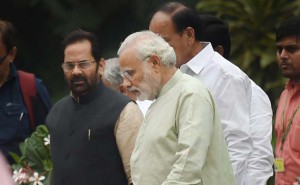 NEW DELHI: The Rashtriya Swayamsevak Sangh or RSS will review the Narendra Modi government’s performance in the last 15 months at a three-day meeting that began this morning. Prime Minister Narendra Modi is expected to attend the meeting, though it’s not clear how much time he will spend there.
12 senior ministers will also attend. Party chief Amit Shah will be present on all three days of what has been billed as a ‘samanway baithak‘ or coordination meeting, being chaired by Mohan Bhagwat, chief of the RSS, the BJP’s ideological mentor.
The latest religious census, which indicated a decline in the Hindu population below the 80-crore mark and a marginal increase in Muslim population, is expected to be discussed, as will the One Rank One Pension demand of ex-servicemen that the government has been grappling with
The RSS has said such reviews are done routinely, mainly to ensure better coordination between its affiliates, the BJP and the government. Among the 93 delegates are members of 15 such affiliates, some of whom complain that key policies in the Narendra Modi government’s reform drive is at odds with the Sangh’s swadeshi agenda.
Sources said the RSS has brought to the meeting the feedback of thousands of its members and sees the need for a “course correction” ahead of crucial assembly elections in Bihar to be held by November.
Affiliates like the Swadeshi Jagran Manch are against genetically modified crops, Foreign Direct Investment, strategic sale of government assets to raise money and opening Indian banks to foreign companies – all key to the Modi government’s long-term economic agenda.
The Swadeshi Jagran Manch had also joined protests against the controversial changes the government had planned in the law to acquire land. The Sangh apprehends that the government has earned an anti-farmer tag by pushing the land bill, which it has now buried.
Other Sangh affiliates like the Vishwa Hindu Parishad are pushing for a bigger say in education and syllabus, sources said.