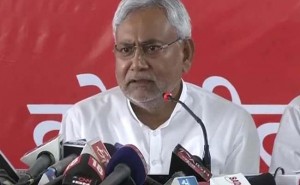 PATNA: Nitish Kumar today attacked the BJP’s ideological mentor Rashtriya Swayamsevak Sangh (RSS) for controversial comments on reservation and sneered that the “RSS is like the Supreme Court for BJP.”
The Bihar Chief Minister called the comments of RSS chief Mohan Bhagwat “dangerous and extra-constitutional.”
“When the RSS says something, it is the final word. What is the BJP’s aukat in front of the RSS?” Mr Kumar said.
In an interview on Sunday to the Organiser, a magazine associated with the RSS, Mohan Bhagwat had said that quota had for years been used as a political tool and suggested that a “non-political” committee be set up to examine who needs the benefit of reservation and for how long.
“The RSS wants an extra-constitutional authority to decide who gets quotas. See what dangerous proposals they have…not Parliament, nor public mandated panel,” Mr Kumar said, mocking ministers in the ruling BJP pronouncing that they were “proud to be swayamsevaks.”
The RSS chief’s comments on reservation have caused a political storm, especially in the charged campaign for next month’s election in Bihar.In a clarification within hours, the BJP said it supports the constitutional reservation for the Scheduled Caste, Scheduled Tribe, Other Backward Castes, backwards and extremely backwards classes.
The party said it “believes that reservation is important for the social, education and economic development of these groups.”Dismissing the clarification, Mr Kumar said: “Amit Shah or his party’s statements don’t matter. He will lose Bihar and they will remove him.”
Nitish Kumar’s alliance partner Lalu Prasad Yadav had also criticised the reservation comment and tweeted that PM Modi must clarify “if he will finish reservations at his master Bhagwat’s bidding.”The RSS is the BJP’s ideological mentor and rival parties accuse it of interfering in the government’s decision making and policy.
The Nitish Kumar-Lalu Yadav combine is being challenged in the polls by an alliance of the BJP and three regional parties that have backward caste vote banks.