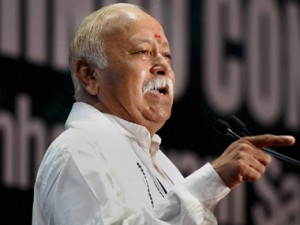 KANPUR: BJP’s debacle in the Delhi Assembly polls and the organisational strategy to galvanise the cadre in UP and Bihar where elections are not far away are likely to be discussed threadbare at the Rashtriya Swayamsewak Sangh’s four-day meet ‘Manthan’ which started here today.
RSS chief Mohan Bhagwat will also address thousands of ganvesh (orgnaisation members) at the railway ground here.The deliberations spread over four days, which will be held behind closed doors, will discuss the organisation’s strategy to galvanise and energise the cadre with elections in key states Bihar and Uttar Pradesh not very far away.
As the meeting comes in the backdrop of the BJP’s rout in Assembly polls in the national capital, the meet is expected to discuss the matter. according to a  RSS functionary “It’s a pre-decided meeting in which all the active members of the RSS in eastern parts of Uttar Pradesh, right from Gorakhpur to Kanpur, will be participating.
He said the meeting would also include workers active in other organisations, including the BJP and VHP.
“The meeting will chalk out the organisation’s future strategy. Bhagwat will interact with top leaders of affiliate groups such as the Vishwa Hindu Parishad (VHP), the Bajrang Dal, the Durga Vahini and Majdoor Sangh,” VHP Awadh region secretary Bihari Mishra said.”Ways to strengthen BJP with a focus on 2017 Assembly elections will be discussed,” Mishra added.
“The focus will be on working of the main organisation and the shortcomings will be analysed,” the functionary said. After the rout in Delhi polls, the organisation will concentrated on its set-up in UP, he said.”During the visit, Bhagwat will take feedback, including that from the BJP.It will be seen what the problems were,” he said.
The second focus will be on the youth and how to get them associated directly with the RSS.
“It will be seen what number has been added in the last one year, because otherwise it won’t even help the BJP,” the RSS functionary said.The focus would also be on ‘shakhaas’ being organised by the RSS, he said, adding, “If shakhaas are strong then there is no need to look for the workers.It’s not about statistics, but the real situation on the ground.”