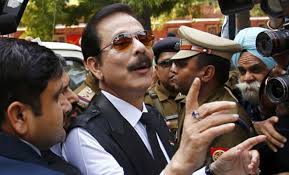 NEW DELHI : The Sahara group on Monday filed an affidavit in the Supreme Court stating it has deposited Rs 3,117 crore so far with SEBI and that it is trying to raise more money to meet the condition of paying Rs 5,000 crore to get bail for its chief Subrata Roy.
Sahara counsel Keshav Mohan told PTI that the group filed an affidavit in the apex court informing it that the company has so far raised Rs 3,117 crore and the amount deposited with SEBI.Roy and two directors were sent to judicial custody on March 4 for the failure of group’s two companies’ SIRECL and SHICL to comply with the court’s order to return to investors Rs 24,000 crore that they had collected through Optionally Fully Convertible Debentures (OFCDs).
The Apex Court had ordered that Roy can be released on bail after depositing 10,000 crore with SEBI out of which Rs 5,000 crore is to be deposited in cash and bank guarantee for the remaining amount.