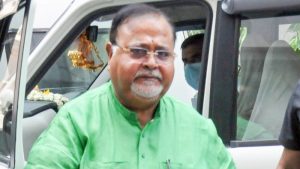 NEW DELHI : The Enforcement Directorate today recovered ₹ 20 crore in cash from the house of an associate of West Bengal Minister Partha Chatterjee. The ED raided Arpita Mukerjee’s house in connection with an alleged teacher recruitment scam in West Bengal.
“The said amount is suspected to be proceeds of crime of the said SSC scam,” the probe agency said in a statement. The search teams are taking the assistance of bank officials for the counting of cash through counting machines. Photos of the house taken during the raid show ₹ 2000 and ₹ 500 notes that were recovered.
At least seven to eight ED personnel arrived at Partha Chatterjee’s Naktala residence in south Kolkata around 8:30 am and carried out searches till 11 am with CRPF personnel keeping guard outside, a source said, adding that another team of officials visited Paresh Adhikari’s home at Mekhliganj in the Coochbehar district and spoke to his family members.
“This raid by ED, a day after the spectacular Martyrs’ Day rally that created ripples all over the country, is nothing but an attempt to harass and intimidate leaders of the TMC. The CBI has already interrogated them (ministers) as part of a court directive and they are cooperating. Now, the ED is being invoked only to discredit them. The money laundering issue is being invented by the BJP,” PTI quoted transport minister Firhad Hakim as saying.
The others who were raided include PK Bandopadhyay, OSD to Partha Chatterjee when he was the state education minister earlier, his then personal secretary Sukanta Acharjee, Chandan Mondal alias Ranjan, a “tout” who allegedly used to take money on the promise of giving school teacher jobs, Kalyanmay Bhattacharya, son-in-law of Partha Bhattacharya; Krishna C Adhikary, and Dr SP Sinha, advisor of the West Bengal Central School Service Commission – convenor of the five-member committee.
More than 20 mobile phones have also been recovered from the premises of Arpita Mukherjee, the purpose and use of which are being ascertained.Apart from Chatterjee, the ED also conducted raids on Minister of State for Education Paresh C Adhikary, MLA Manik Bhattacharya and others. Partha Chatterjee, who is presently the minister for industries and commerce, was the education minister when the alleged illegal appointments were made in government-run and aided schools by West Bengal School Service Commission (WBSSC).

Apart from this, the ED also raided the premises of Minister of State for Education Paresh C Adhikary, LA and ex-president of West Bengal Board of Primary Education Manik Bhattacharya, and others. “The said amount is suspected to be proceeds of crime of the said SSC scam,” the federal probe agency said in a statement. The search teams took the help of bank officials for counting cash through machines.
The ruling Trinamool Congress described the raids as a “ploy” by the BJP government at the Centre to “harass” its political opponents. “This raid by ED, a day after the spectacular Martyrs’ Day rally that created ripples all over the country, is nothing but an attempt to harass and intimidate leaders of the TMC,” West Bengal Transport Minister Firhad Hakim said.
Kalyanmoy Ganguly, the ex-president of the West Bengal Board of Secondary Education; Saumitra Sarkar, ex-president of the West Bengal Central School Service Commission; and Alok Kumar Sarkar, the deputy director of the School Education Department were also raided. “A number of incriminating documents, records, details of dubious companies, electronic devices, foreign currency and gold have been recovered from the premises of persons linked to the scam,” the agency said.
The ED’s money-laundering case stems from an FIR by the CBI, which was first directed by the Calcutta High Court to investigate the alleged scam in the recruitment of Group ‘C’ and ‘D’ staff, assistant teachers of classes 11 and 11 and primary teachers. Chatterjee held the education portfolio when the alleged scam was reportedly pulled off. He was interrogated by the CBI twice, once on April 26 and then on May 18. Adhikari, the minister of state for education, had also been grilled by the CBI with his daughter losing her job as a school teacher.
The Enforcement Directorate (ED) on Friday said it has seized Rs 20 crore in cash after conducting raids on the premises of Arpita Mukherjee, a close associate of West Bengal Minister Partha Chatterjee, in connection with an alleged teacher recruitment scam in the state, news agency PTI reported.”The said amount is suspected to be proceeds of crime of the said SSC scam,” the ED said in a statement.
(With Inputs from Kolkata Bureau).