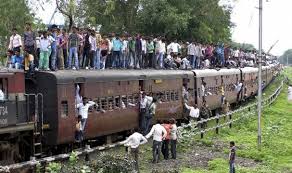 NEW DELHI : After announcing a steep hike in rail fares from tomorrow, the new government today faced rollback demands from its own MPs and its ally in Maharashtra, which goes to polls in a few months.
10 MPs of the BJP and its oldest ally Shiv Sena met Railway Minister Sadananda Gowda this morning. The members, who are from Mumbai and neighbouring Thane, demanded that the hike be withdrawn, especially in local train fares in Mumbai.
“The rail minister assured us that feelings of Mumbaikars will be considered,” said the BJP’s Kirit Somaiya after the meeting.
Fares for local trains in Mumbai, used by some 75 lakh commuters every day, will double after the 14.4 per cent increase announced on Friday.
BJP and Sena leaders in Maharashtra are worried that the massive hike may disenchant voters ahead of assembly elections and undo the big gains in the national election, which saw the combine win 41 of the state’s 48 seats. The alliance partners hope to return to power this time after 15 years.
On Monday, the Shiv Sena likened the decision to “running over the common man with a train.” The party has 18 parliamentarians and one minister in the Narendra Modi-led government.  The BJP, which enjoys parliamentary majority on its own, was accused by the Sena of not consulting allies before changing fares.
Shiv Sena’s Sanjay Raut said yesterday people can’t “digest bitter pills”, a sharp comeback to the PM, who recently said that “bitter medicine” is needed to revive the economy. Mr Raut even mocked the BJP’s campaign slogan “Acchche Din Aaney Waale Hain (good times are here)” as “over the top” and insincere.
Finance Minister Arun Jaitley and other BJP leaders have defended the hike as necessary; they say the previous UPA government backtracked on a plan to increase fares just before the national election, leaving the unpopular decision to Mr Modi’s new administration.Indian Railways, one of the world’s largest rail networks, is desperate for funds after years of low investment and populist policies to subsidise fares.