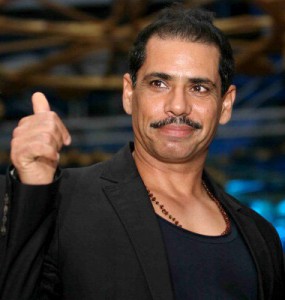 NEW DELHI: The Robert Vadra land deal “cases” will be brought to their “logical conclusion and justice done in each case without any fear or pressure from any quarter”, promises BJP’s Chief Whip in Lok Sabha Arjun Ram Meghwal, who has been persistently pursuing the allegedly illegal land deals of Congress president Sonia Gandhi’s son-in-law for the past three years.

Mr Meghwal, the only Lok Sabha lawmaker to cycle to parliament, also said that the BJP would do everything to “bring out the truth” behind former IPL chief Lalit Modi’s “links with Congress leaders”.

“Enquiries are already going on against Mr Vadra’s land deals in Bikaner, Haryana and Delhi. There is a Land Ceiling Act in Rajasthan and, when an ordinary person violates it, he faces action from law authorities. Mr Vadra and his companies have openly violated the Act. We will take this issue to its logical end. I am confident that in the Bikaner land deal, Mr Vadra will definitely be caught,” Mr Meghwal told  News Agency IANS in an interview.
Initially a weaver, Mr Meghwal, 62, went on to become an IAS officer and then a Member of Parliament from Bikaner.
On the Lalit Modi case, Mr Meghwal said: “BJP will take the Lalit Modi issue further. We will bring the facts into the public domain about how many Congress leaders have relations with Lalit Modi,” Mr Meghwal said.
He also said that the previous UPA government’s decision to launch Enforcement Directorate action against Lalit Modi was done with “bad intention” and the Modi government would “prove this point at a proper time”.
“P Chidambaram’s (former finance minister) letters to the UK Chancellor of the Exchequer on Lalit Modi was written with bad intentions,” he said.”We will take this issue to its logical end,” he added.
Lalit Modi is embroiled in a row over alleged financial irregularities when he was the Indian Premier League commissioner. The Enforcement Directorate has built up a case against him. The government had also cancelled his passport. He is living in UK since 2010.
On the ongoing logjam in parliament, Mr Meghwal accused the Congress party of playing petty politics, saying “they are trying to regain their lost ground by raising an issue which is a non-issue.””Congress’ behaviour in this session was totally different. To regain their lost ground they are using the platform of parliament and shying away from debate,” he said.
Defending External Affairs Minister Sushma Swaraj over her links with Lalit Modi, Mr Meghwal said, “Sushmaji helped an Indian woman who has been suffering from cancer. What she did was with good intentions.”
He also defended Rajasthan and Madhya Pradesh Chief Ministers Vaundhara Raje and Shivraj Singh Chouhan.He said Ms Raje has done nothing illegal or immoral whereas Mr Chouhan himself is a whistle blower in Vyapam scam.
The Congress, supported by some other opposition parties, has been demanding the resignations of Sushma Swaraj and Vasundhara Raje over their association with Lalit Modi, while Shivraj Singh Chouhan is embroiled in the Vyapam recruitment scam controversy.