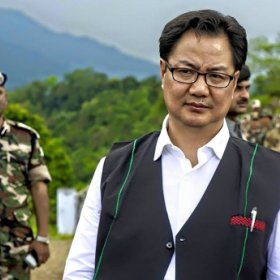 NEW DELHI: Minister of State for Home Kiren Rijiju today clarified he was just quoting a former Delhi Lieutenant Governor who had commented on north Indians breaking the rules. He said he was “not pointing at any region, religion or other group.”
“A former Lieutenant Governor of Delhi had made this comment around eight years back… I just said he is correct, but this applies to all sections of society,” Mr Rijiju said.
“I am not pointing at any region, religion or other group. The way crime is increasing, as a society we are responsible as a whole for it,” he said.At a function in the national capital yesterday, Mr Rijiju said that people of north India enjoy breaking the rules.
“I was witness to a statement made by one of Delhi’s former Lieutenant Governors. He had stated that people of north India enjoy breaking the rules and by evening he was forced to apologise. But I believe what he said was right,” Mr Rijiju had said.
The comment drew flak, with Delhi Chief Minister Arvind Kejriwal, in tweet, asking the minister not to divide Indians between north and south.
“Rijiju ji, please don’t divide Indians into north and south Indians, Hindus and Muslims,” Mr Kejriwal tweeted.”All Indians are good. It is politics that we need to improve,” he said.