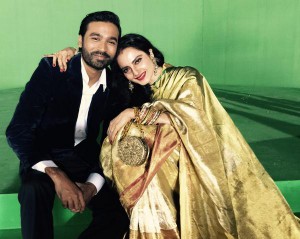 MUMBAI: Ranjhana fame actor Dhanush created buzz in B-town by posting a picture with veteran Bollywood actress Rekha on micro-blogging site Twitter on October 1. Though the update was delightful, which read: “LOOK whom I’m sharing screen space with in shamitabh. The one and only REKHA JI !!! #beautyforever”, an immediate question arose if she will be sharing the screen space with her Silsila co-star Amitabh Bachchan after three decades? Well, it’s not confirmed yet.
Media reports revealed that Dhanush denied to comment on the matter while the report further confirmed through its sources that Rekha has shot a few sequences for R Balki’s next film, but it’s not certain if she will be finally seen with Big B. It is also said that Rekha will not have a big role.
More than any tweet, a movie would be a treat-to-watch if the iconic on-screen couple gets back together. Rekha and Amitabh appeared in Yash Chopra’s romantic drama Silsila (1981) last.