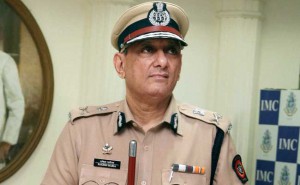 MUMBAI: Rakesh Maria has denied reports that he plans to resign, a day after his removal as chief of the Mumbai police in the middle of the high-profile Sheena Bora murder investigation.
Before Mr Maria was shifted, he confronted questions about his direct involvement in the investigations, which, according to sources, upset him deeply.
Maharashtra Chief Minister Devendra Fadnavis, who signed off on the transfer before leaving for a foreign tour on Monday night, is believed to have raised the question after publicly commenting that the police must pay equal attention to other cases that are not in the media glare.
Top Maharashtra police sources, reacting to a report quoting Mr Maria as saying that he was planning to quit, said: “Maria is a fine officer, hope this does not happen.”
Since the arrest a fortnight ago of former media executive Indrani Mukerjea and two others for the murder of her daughter Sheena Bora in 2012, Mr Maria had been perceived as unusually hands on in the investigation, spending long hours interrogating all the accused and giving unprecedented media briefings.
Sources close to Mr Maria explain that he needed to go to the police station as the accused, especially Indrani Mukerjea, were “high profile, not cooperating and speaking in hi-fi English.”
But his critics say other officers could have handled the interrogation in English.
Mr Maria has also denied allegations that he knew either Indrani Mukerjea or her husband, TV tycoon Peter Mukerjea before he interrogated them.
On Tuesday, Mr Maria was promoted as Director General of Home Guards, Maharashtra; he swapped places with Ahmed Javed, who has taken charge as Mumbai police commissioner, a post that has been upgraded.Mr Maria was due for a promotion but sources close to him say he never expected it “so soon.”
As speculation swirled around the future of the Sheena Bora investigation that he had helmed so proactively, the state government said Mr Maria would keep additional charge of the case. But it is not clear whether he has accepted it or who he will report to if he does.