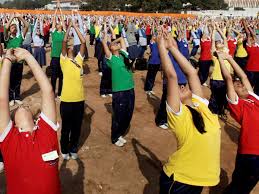 NEW DELHI: The stage is set for International Yoga Day celebrations on Sunday as India leads 191 countries to mark the day with over 35,000 participants expected to perform various yoga ‘asanas’ at a mega event on Rajpath in New Delhi.
While Prime Minister Narendra Modi will address the gathering, diplomats from 152 foreign missions have been invited to take part in the event which will start at 7 am to 7.35 am. Given the expected large participation at one place, the Ministry of AYUSH which is coordinating the event, will aim at registering the event into the Guinness World Records for the “largest yoga demonstration or class at a single venue”.
The day will be observed in over 251 cities in 191 countries across the world and the Indian missions and diplomatic posts have made arrangements for the celebrations and other related events. Government will set up 2,000 huge digital ‘cinema screens’ across Rajpath for people to witness the live streaming of the performance of yoga asanas on Sunday.
Besides Delhi, the yoga event will held on a large scale in Lucknow, Kolkata and Patna which will be streamed live on Doordarshan and through webcast. Similarly all the states have been requested to celebrate IYD simultaneously and to organise similar events at district and panchayat headquarters. Over 11 lakh NCC cadets will perform according to Common Yoga Protocol and about 9 lakh members of armed police forces in their respective field units.

Stamps brought out by Department of Post on IYD as well as coins of Rs 10 and Rs 100 denominations brought out by the Finance Ministry will also be released during the mega event at Rajpath.

Apart from the government, several organisations will also hold similar yoga events as per their capacity including Ramdev who will hold 1,100 programmes and has targeted reaching one lakh villages, while Sri Sri Ravi Shankar has claimed to reach five crore people.

The government has also roped in celebrities like Amitabh Bacchhan, cricketer Virat Kohli and wrestler Susheel Kumar while other stars in various countries have also been roped in for the event.
The yoga celebrations are being held in the national capital after the United Nations had in December last year declared June 21 as International Yoga Day, with 177 countries voting in favour. The proposal had been mooted by the Prime Minister during his first address to the UN General Assembly in September last year.