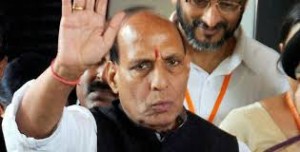 NEW DELHI : BJP President Rajnath Singh will discuss the party’s restructuring and impending changes at a meeting of its office-bearers here tomorrow.According to sources, Singh, who is Union Home Minister, will chair a meeting of party office-bearers and ministers to discuss the possible changes in the BJP after government formation.
Sources said the meeting has been convened at the party headquarters tomorrow which will be attended by senior ministers including Arun Jaitley, where the office-bearers will also be told to prepare for assembly elections in Maharashtra, Haryana, Assam and Jharkhand, besides Jammu and Kashmir slated for later this year and early next year.
The party also has to evolve its strategy for Delhi where BJP missed out on forming a government of its own by a narrow margin following last year’s assembly elections.Other senior party functionaries, who are now ministers in the Union Cabinet M Venkaiah Naidu, Nitin Gadkari, Ravi Shankar Prasad and Ananth Kumar, are expected to be present at the meet. Party general secretary (Organisation) Ram Lal and other general secretaries Amit Shah and J P Nadda will also be present.
The meeting comes ahead of a possible major revamp in the party as many office-bearers of BJP have joined as ministers in the government. Sources said Shah, Nadda and Om Prakash Mathur, another party general secretary, are in the race for replacing Rajnath Singh as BJP president who is likely to relinquish charge soon.