SHIMLA: BCCI vice president Rajiv Shukla on Sunday refused to speak on the Himachal Pradesh Cricket Association (HPCA) land row with the state Congress government, saying it was a state issue.Shukla, who is understood to have a good equation with Bharatiya Janata Party Lok Sabha member and HPCA chief Anurag Thakur on cricket affairs, said he would not speak on the issue as the matter was sub judice. 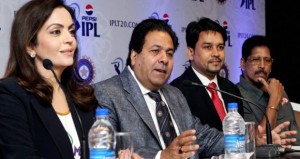 “It won’t be appropriate for me to comment on the issue,” he told reporters here.On Chief Minister Virbhadra Singh making the HPCA irregularities a major issue in the Lok Sabha polls, he said: “It’s up to the state leaders to decide on election issues. For me, the matter is sub judice.” Asked about mixing of sports and politics, Shukla, the party in-charge for the hill state, said there was no harm in getting associated with sports if a politician was devoted to a particular sport.
“Many politicians in the past have contributed a lot to cricket,” he said. He, however, refused to comment, when asked about Thakur’s contribution to cricket in the state as HPCA president.
“Why do you want me to comment on personal lines? I won’t do that,” he added. The vigilance and anti-corruption bureau filed a cheating and misappropriation case in August 2013 against the HPCA.The state government this month got sanction to initiate proceedings against former chief minister Prem Kumar Dhumal for alleged wrongdoing in allotment of land during his regime to the cricket body led by his son Thakur, the joint secretary in the Board of Control for Cricket in India (BCCI), who is re-contesting the Lok Sabha election from Hamirpur in the state.
The BJP, however, has denied any wrongdoing in the allotment of land for the players’ residential complex near HPCA’s picturesque stadium in Dharamsala, some 250 km from the state capital.