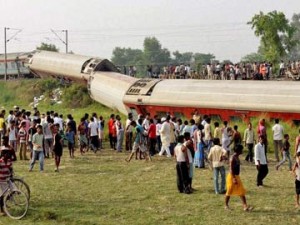 CHAPRA: A passenger train headed from New Delhi to Assam derailed early this morning in Bihar, killing five people.Initially, officials said an explosion on the tracks may have caused the accident, which left 12 carriages of the Rajdhani Express toppled over near the Chapra station, 75 kilometres from the state capital of Patna. (See pics)
“Prima facie, it appears to be a case of sabotage,” Railway Board chairman Arunendra Kumar told the Press Trust of India (PTI) news agency. “There was a blast on the track, which could have caused the derailment.”But Home Minister Rajnath Singh said it was “too early” to blame the insurgents, according to PTI, while a senior police officer said that a “technical fault” could have been to blame.
Maoist rebels had earlier called for a strike in the area to protest against the security forces and police said they had recovered three crude explosive devices that had been planted in a marketplace in a nearby town.
Officials acknowledged that a mandatory precaution had been ignored. In areas where the Naxals are active, popular passenger trains like Shatabdi and the Rajdhani Express are meant to be preceded by “a pilot engine” which checks that the tracks are safe.
For the train that derailed, this security check was not conducted. “We can’t escort every train,” said Madhuresh Kumar, General Manager, East Central Railway.Ram Pratap Singh, one of eight passengers who were injured, told a TV channel, “The carriage tipped over and over again and a passenger on a top (berth) fell on me.”