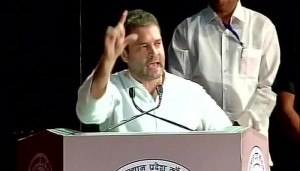 JAIPUR: In his sharpest attack yet on Prime Minister Narendra Modi, Congress vice president Rahul Gandhi on Friday said that the Congress will not let the NDA government pass the Land Acquisition Bill in Parliament and that the PM’s “56-inch chest will be reduced to 5.6-inch chest in a matter of six months”.
“We will not let the Land Acquisition Bill pass in Parliament. We will not let the government snatch even one inch of land (from farmers). 56-inch chest will become 5.6-inch chest in six months, you all will see,” Rahul said.
“The country’s farmers, the Congress party and the nation’s public will ensure 56-inch chest is reduced to 5.6-inch chest,” he said while addressing party workers here.The Congress vice president is on a two-day tour of the state of Rajasthan.
Rahul said Narendra Modi, after becoming the Prime Minister, has forgotten farmers.“Now that he has become the PM, why should he be concerned about farmers? He had made several promises to them, but all empty ones,” he told the audience.
The Congress leader said PM Modi was not able to understand that he was trying to help him.“Speaking from here, I am just conveying the feelings of the people of the nation to the PM,” Rahul said.
He also hit out at the PM for centralising powers in his hand, and said there is only one minister in the Union government.
Rahul also hit out at Rajasthan Chief Minister Vasundhara Raje and said her government’s remote control was in London.The Congress leader was implying the BJP government in Rajasthan was being run by former chief of the cash-rich Indian Premier League (IPL), Lalit Modi.
“Like during the British Raj days, remote control of the government here was in London. Similarly, Rajasthan government’s remote control is in London,” said Rahul, adding “he (Lalit Modi) presses the button there and the reaction is seen here”.
“Your CM gave it in writing that she wants to help a fugitive but doesn’t want Indian authorities to know. Why? Because her remote control is in London,” said the Congress leader.
“It is neither the BJP government nor Vasundhara Raje government here. It is the Lalit Modi government. These are old relationships… these have been in place for long.”
It may be recalled that Raje was in the dock recently for helping Lalit Modi secure immigration papers in the United Kingdom, where he has been living since 2010 after been named in several corruption cases linked to the IPL.