VARANASI: wearing a Nehru topi in Congress colours, stood in a crowded open jeep and waved to the people of Varanasi as he toured the city in a revenge roadshow.
The streets were packed with people waving Congress flags and many came on to their terraces to catch a glimpse of the 43-year-old Mr Gandhi. Shehnai played by legendary musician Bismillah Khan’s family by the roadside greeted the Congress leader in one of the more renowned localities of Varanasi. 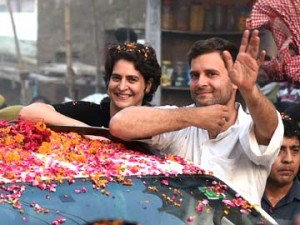 On the last day of campaigning in Varanasi, Mr Gandhi is here to seek votes for Ajai Rai, the local leader his party has fielded against Narendra Modi, the BJP’s prime ministerial candidate.
On Monday Mr Modi had stormed Amethi, Mr Gandhi’s constituency since 2004, in the last hours of campaigning there. While Mr Modi and his chief challenger in Varanasi, Arvind Kejriwal of the Aam Aadmi Party chose to begin their roadshows in the Lanka area of the city, Mr Gandhi will end his 11-km journey there. The Congress chose Gol Gadda as the starting point for the roadshow with an eye on the large Muslim presence in the area. The Congress and Mr Kejriwal are fighting for the attention of Muslims, about 15 per cent of Varanasi’s population.
But Mr Azad emphasised, “We are 100% confident of a win.”The effort today is to draw the maximum crowds to demonstrate a show of strength. People have poured in from neighbouring districts and the NSUI, the students wing of the Congress and an organisation Mr Gandhi has mentored, has been tasked with ensuring that the roadshow draws massive crowds. The benchmark here is Narendra Modi’s colossal roadshows. The BJP leader held a spectacular roadshow on the day he filed his nomination papers. On Thursday, he drove through the city in a show of strength after being refused permission for a rally in the heart of Varanasi.