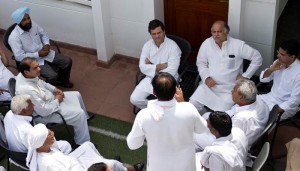 NEW DELHI: Rahul Gandhi, who returned from a 56-day sabbatical two days back, on Saturday interacted with a delegation of farmers from Uttar Pradesh, Rajasthan, Haryana and Punjab and discussed changes being brought in UPA’s land law by the Narendra Modi government.
Rahul, accompanied by Rajasthan PCC Chief Sachin Pilot at his residence, assured the farmers his party’s full support.The Sunday rally is being seen as some sort of a relaunch of Rahul, who is being hailed as a “mature” leader who would restore the party’s health after its downturn in Lok Sabha polls.
With the Sunday rally being the first major public outreach event for the Congress vice president after his leave, the party is pulling out all stops to galvanise support for the rally.”Tomorrow’s rally would be a historic rally. Lakhs of farmers from across the country will get together in Delhi and we want to expose this BJP government for the way farmers have been duped only to pay back favours of some people. The BJP is ‘conspiring’ to take over the land of small farmers,” Pilot said.
A senior party functionary said that besides the rally, Rahul will also be speaking in the Lok Sabha and is expected to take on the government after the second part of the Budget session begins on Monday.
Congress is hoping to rally around people from various parts of the country with the ‘Chalo Dilli Chale’ slogan which will be seen on hoardings and heard on FM radio channels on which it has booked spots.
A 17-coach ‘Kisan Express’ train carrying farmers will leave from Jaipur and arrive at Delhi after six stops on the rally day. State leaders have been directed to ensure that the rally has full attendance.
Seeking to protest against the Narendra Modi-government’s “anti-farmer and anti-poor” policies, the rally is being organised at a “mammoth” scale that would witness “a sea of humanity”, the spokesperson said.
The Congress vice-president arrived in New Delhi yesterday after a two-month long break from the political scene. His whereabouts were a matter of much speculation and it is still not known where he spent his holidays.
The Congress had, however, defended his absence and said that the 44-year-old leader wanted time off for introspection after a series of electoral drubbings.