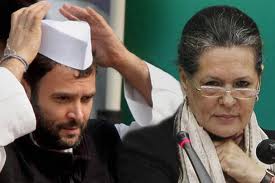 NEW DELHI :Congress vice president will helm day-to-day affairs and decisions, but Sonia will have final say in critical matters, say senior leaders,
With his intense and raging speech at the Talkatora stadium on Friday, perhaps Rahul Gandhi wanted to send a loud and clear message about who is the boss in the Congress. But despite being the grand old party’s chief election campaign manager, the 45-year-old Congress vice president is unlikely to have much of a say in critical matters. Senior party leaders say that Congress president Sonia Gandhi will continue to be the final authority in picking candidates for the 2014 general election as well as on forming alliances.
Party leaders feel that Sonia has been increasingly detaching herself from routine party work, and entrusting responsibilities to her son. “Over the past one year, office bearers in-charge of flagship schemes and frontal organisations have been reporting to Rahul Gandhi instead of to his mother. This has now become a robust mechanism,” a Congress leader told dna on condition of anonymity.
For his part, Rahul has been increasingly asserting himself, often overriding the party’s line. In September 2013, he hijacked Congress spokesperson Ajay Maken’s press conference to dramatically tear up a document of the controversial ordinance on preventing the disqualification of convicted MPs and MLAs. In December, he criticised the Maharashtra government over the Adarsh Commission report, after which the state was cornered into reconsidering it. Congress general secretaries and secretaries are therefore not taking a chance, given that Rahul has a reputation for not accepting apologies easily.

With Rahul now officially leading the party into the elections, it would appear as though Sonia might take a backseat. However, party leaders say that while Rahul will definitely be in charge of the poll strategy and the party’s day-to-day affairs, Sonia will expend her energy in the 2014 battle, contest from Rae Bareilly in Uttar Pradesh, select candidates for Congress tickets and decide on poll alliances.
In the backdrop of the Congress’ recent drubbing in four of five state assembly elections, Sonia is firmly in charge of factors that will be critical for the Congress’ future i.e. candidate selection and poll alliances. Given that Rahul will have the opportunity to experiment candidate selection by way of a referendum for 15 seats, which will be these 15 seats has not yet been decided. Besides, the number of experimental seats may not be significant in view of the total 543 seats. Also, while Rahul is not in favour of an alliance with Lalu Prasad Yadav’s RJD, senior party leaders expect Sonia to prevail on the decision.
It must also be kept in mind that it was Sonia’s decision not to anoint Rahul as the party’s prime ministerial candidate. At the Congress Working Committee (CWC) meeting on Thursday, she cut short senior leaders and reminded them about party traditions and provisions of its Constitution, where elected representatives are entitled to choose their leader. She refused to bow to pressure at the All India Congress Committee session, telling members there was no going back on the decision.