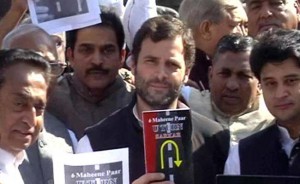 NEW DELHI : Rahul Gandhi, the Vice President of the Congress, was at the frontline this morning of a protest by his party accusing the government of habitual U-turns on important policy issues.
Mr Gandhi was accompanied by other Congress lawmakers as they walked to Mahatma Gandhi’s statue at Parliament where they stood together, holding copies of a pamphlet released by the Congress yesterday.
Titled “6 Maheene Paar U-turn Sarkar“, the pamphlet lists 25 matters on which the government has allegedly changed its stand in its six months in power. The Congress, which was saddled with its worst-ever defeat when the BJP won the election, says the BJP misled voters by making promises that it has now backed away from.”This government has made 25 U-turns in the last around 180 days. That’s an average of one U-turn every seven to eight days,” said Congress leader Ajay Maken as he released the booklet.
As an example, it cites the BJP’s campaign commitment to recovering black or untaxed money stashed away by Indians in foreign bank accounts. The party had promised to bring back that money within xx days of being elected. However, it now cedes that tax agreements and other covenants with countries like Switzerland make this a complicated process that also bars the disclosure of names of account-holders at early stages of investigation.
The Congress says this is exactly the stand it had taken while it was in office, only to be repeatedly attacked by the BJP, then the Opposition, for trying to protect tax violators.
The Congress also says that the Prime Minister and the BJP, who opposed a land-swapping deal with Bangladesh while they were in opposition, now appear to be endorsing the proposal that would affect nearly 50,000 people who live in 162 enclaves – small pockets of one country’s territory surrounded by that of the other. The proposed solution would enable each side to acquire the enclaves within its borders.