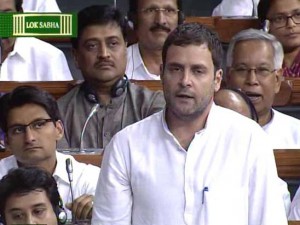 NEW DELHI: After taking on the Narendra Modi government over its controversial land acquisition ordinance, Congress vice president Rahul Gandhi now wants a thorough discussion on the net neutrality issue.
According to reports, the Congress leader has on Wednesday given a notice demanding the suspension of Question Hour to allow a debate on the net neutrality issue in the Lok Sabha.‘I will speak briefly in Parliament on net neutrality,’ Rahul Gandhi said while speaking briefly to reporters today.
An adjournment motion involves an element of censure against the Government. However, it is up to the Speaker to decide on taking up the motion.A strong plea was made yesterday in the Lower House for ensuring net neutrality with demands that the recent consultation paper brought out by TRAI should be scrapped and attempts by certain telecom and internet service providers be scuttled.
Raising the issue during Zero Hour, MB Rajesh of CPI-M had alleged that the consultation paper brought out by the Telecom Regulatory Authority of India was “blatantly supporting” assault on net neutrality by telecom and internet service providers.
Speaker Sumitra Mahajan then said a notice should be given for a half-an-hour discussion and she would allow it.
Interestingly, the Congress party supports net neutrality and maintains that free internet is a pre-requisite for dissemination of ideas and growth of freedom in the 21st century.
The issue has been making headlines after the Telecom Regulatory Authority of India (TRAI) proposed to regulate over-the-top internet services, like applications with the ability to make phone calls etc.
Thousands have since then joined ‘Save the Internet’ campaign and sent over 1 lakh emails to TRAI asking it to uphold internet freedom.Amid massive online protests to maintain unhindered access to the internet for all, the government has indicated that it will go by the opinion of the majority of people.
Telecom Minister Ravi Shankar Prasad today said that the government fully supports net neutrality.“My government is serious about the issue. It will do all that is possible to uphold the freedom of internet. TRAI’s report in this regard will be considered by Telecom Commission first,” he said.
However, a final call would be taken after examining the TRAI report and the Telecom committee’s recommendations in the second week of May, he said.The government has also sought responses of people by April 24, he added.
Congress had earlier threatened to raise the issue in Parliament forcefully when its sits again for the second half of the Budget Session, keeping in view that India has 24.31 crore “Internet Users”, out of which 17.30 crore are “Mobile Internet Users’.