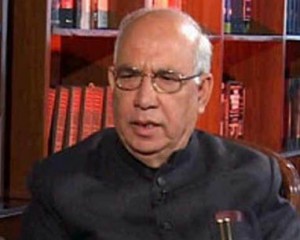 NEW DELHI: Former Union minister Hansraj Bhardwaj has slammed his own party Congress and said that it to weak to fight Bharatiya Janata Party (BJP).
In an interview to Indian Express, Bhardwaj said, “Vice president Rahul Gandhi were out of touch with the ground reality and Congress.”He said, “Rahul is a young man. He has to lead the young people. But he is not in touch with the senior people, he doesn’t show any inclination. So he is also out of touch.”
Bharadwaj also went ahead saying that the party in its current form, was in no condition to stop the Narendra Modi juggernaut.“No, they are not in a fit state of health to control this powerful campaigner who is backed by a powerful cadre. That is why there was a virtual walkover in 2014,”
Bharadwaj also slammed Congress for threatening it would not let Parliament function if no action is taken against Sushma Swaraj and Vasundhara Raje.
“I don’t think it is proper to take such a decision. Whoever has violated any law, the legal course must, and will, follow. But stopping the house from functioning is not good parliamentary practice. Parliament is the highest forum for discussing important issues concerning the people,” said Bharadwaj.
Bharadwaj also questioned Congress’ decision to align itself with the internal politics of the BJP.Meanwhile, BJP leader said that senior Congress leader Hansraj Bharadwaj was right to criticise the grand old party, inviting the Sonia Gandhi-led political organisation to introspect on its tactics.
“Senior Congress leader Hansraj Bhardwaj has rightly criticised his party. The Congress needs to introspect on its tactics,” BJP spokesperson GVL Narasimha Rao said.
Earlier,  Bhardwaj had accused Congress of gross corruption. “Manmohan Singh is an honest man. The court has issued summons to him, and he has gone because he believes in the rule of law. But imagine how much waywardness has been present for even him to be summoned. Rajiv Gandhi was an innocent.
These corrupt people had pitted him against VP Singh. His friends abandoned him, but we never left his side even after he died,” he added.
Bhardwaj is a very senior leader of the party and the country. Five times he was a member of the Rajya Sabha and had been Law Minister in the UPA and later Governor.