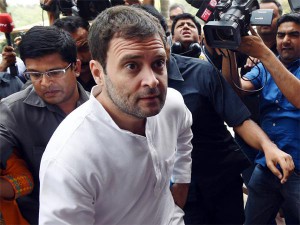 NEW DELHI: After wowing his partymen with two Parliament speeches this week, Rahul Gandhi is off on a two-day trek to Kedarnath in the hill-state of Uttarakhand today. It is being described as a personal visit to a famous temple there, which was devastated in flash-floods two years ago and has since been restored.
“I offered Rahul a chopper to Kedarnath, but he insisted on trekking. He will trek from Gaurikund to Kedarnath, a distance of 17 km,” said Uttarakhand Chief Minister Harish Rawat, joining the ranks of starry-eyed Congressmen delighted at the energy that Mr Gandhi has put on display ever since he returned from a mysterious 57-day sabbatical last week.
The Congress veteran reminisced how he had accompanied Rahul’s grandmother and former Prime Minister Indira Gandhi to Badrinath, about 40 km from Kedarnath, 36 years ago. “I accompanied Indira Gandhiji to Badrinath in 1979, now I have the privilege of accompanying the future of the Congress party. Just as Badrinath baba blessed Indira, Kedar baba will bless Rahul,” said Mr Rawat.
Rahul Gandhi, 44, is widely tipped to take over as Congress president this year. His mother and Congress chief, Sonia Gandhi, gave the clearest indication that his promotion to the post she holds is imminent when she said this week, “The only answer will come from him.”
During his two-month leave of absence, which included multiple extensions, some party leaders raised questions on Mr Gandhi’s political maturity and ability to steer the Congress out of the troubles it finds itself in. But ever since he returned, Mr Gandhi has seemed determined to demonstrate that he alone is the face of the party’s attempt at a political revival, after being diminished to its worst ever position in the last national elections and state elections held since.
Ever since he returned to India last week, reportedly after a stint of vipassna or meditation, Mr Gandhi has attacked the Narendra Modi government at the Centre every day, both in Parliament and outside.
The Congress leader will start his yatra from Gaurikund at around 11:30 am today, along with a number of political leaders and others. He will stay overnight en route and will offer prayers at the Kedarnath temple after 8:30 am on Friday.