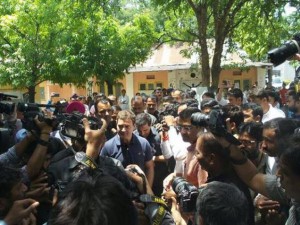 PUNE: Congress vice president Rahul Gandhi on Friday extended support to the students of the prestigious Film and Television Institute of India (FTII), who are protesting against appointment of Gajendra Chauhan.Lending his support to students, the Congress leader said the RSS is “undermining” the institution’s stature by promoting “mediocrity”.
Interacting with the students, the Congress vice president asked why the “little school” was “disturbing” the government’s peace of mind and flayed the RSS, saying it wants to promote its idea and would brand the protesting students as “anti-national”.
“RSS and its ideologues are systematically promoting mediocre people in the system…They are hell bent on undermining the educational institutions’ stature…It is not going on just in the education system but also in bureaucratic and judicial system.”
“Why is that a little school with around 250 students is disturbing the government’s peace of mind. If students don’t want him (Gajendra Chauhan), then he clearly should not be there. This is an attempt to bully you,” he said during an an open session with the protesting students.He assured the students that he would raise their voice in Parliament.
“RSS wants to promote their idea. They will call you anti-national, anti-Hindu. They are scared of you. That is the nature of a bully,” he said.As Gandhi visited the prestigious institution, BJP workers raised slogans outside.FTII students have been on strike for the past 50 days objecting to appointment of TV actor Chauhan as institution’s chairman.
Gandhi also used the platform to draw comparisons between the Congress and the BJP regime saying, “In Congress whenever there is an issue, it is discussed…Some agree some don’t. But in BJP if the Prime Minister has decided, no one can say anything”.
Earlier this month, the students body had written to leaders from various political parties requesting them to intervene and urge the government to revoke the appointments of ‘unfit’ people and to set up a transparent procedure for future appointments. The students have charged that Chauhan and other four appointed members “lack credentials” and have been selected because of their “affiliations” to the RSS or the BJP.
“You have all the right to question the government that why are mediocre people being put to mentor you. I am here because your voice is not being heard.””There is fundamental difference in the way you think and the way RSS thinks. For students the college is their flesh and blood, but for them it is just a hall or a structure to impart information,” Gandhi said.
He also assured the students that if there is any move to privatise the institution, he will strongly oppose it.”We are not in government but if there will be any privatisation of the institute, I will be sitting here with you,” he said. Gandhi also asked the students to look beyond this “minor fight” and take further challenges.
“Changing this gentleman is not a big deal. This is a minor fight you are facing here. The real fight is fighting for the idea of the country outside here. You should gear up for those challenges,” he said.
Students raised their concerns before Gandhi and presented their arguments in support of the demands being raised by them.A student at the Institute said, “My parents do support what I am doing in being part of this agitation but that feeling of insecurity and threat is there. The government has not paid any heed to our demands for a dialogue, why can’t we simply have a discussion where we are also heard”.
Ajayan Adat, representative of FTII students’ association said, “Structure of Indian democracy is such that certain issues need to be raised inside Parliament. We cannot raise them ourselves. Hence we had to approach everyone cutting across party lines”.A 10-member delegation had met I&B Minister Arun Jaitley on July 3 but the ministry refused to rollback the appointment as chairperson of the FTII Society and dissolve the society.
FTII students along with supporters from various education institutes and other organisations will now take out a rally from Jantar Mantar to Parliament House in New Delhi on Monday in support of their demands.