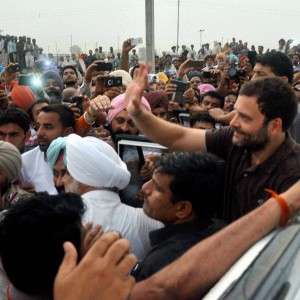 MUMBAI: Congress vice president Rahul Gandhi is on Thursday holding a 15-kilometre day-long padyatra in Amravati district of Maharashtra’s Vidarbha region. Here are the live updates:
Rahul Gandhi meets with family members of Kishor Kamble, a farmer who had committed suicide, during his padyatra in Amravati. Rahul also interacted with farmers in Kunha village during his padyatra.
Rahul is now marching to Shahpur village, five kilometres from Gunji. Rahul also met a group of children from orphanges in Gunji and interacted with them briefly. In Gunji, Rahul meets family members of farmers Nilesh Walke and Ambadas Vahile who had committed suicide recently.
Rahul Gandhi is interacting with farmers along the route of his padyatra. He can be seen entering farmers’ homes and chatting with them.
​Rahul Gandhi has begun his 15-kilometre day-long padyatra from Gunji village. The aim of the foot march, being undertaken in Amravati district, is to highlight the agrarian crisis in Vidarbha region.  Rahul Gandhi has reached Gunji village from where he will begin his padyatra.
A day before on Tuesday, the Congress vice president had travelled to grain markets in Punjab’s Sirhind, Khanna and Mandi Gobindgarh towns in the second class compartment of a train to interact with farmers about the problems they are facing with procurement and lifting of wheat stocks. He had criticised the Modi government and the state government for being indifferent to the problems of farmers.
On Wednesday, Rahul took on Prime Minister Narendra Modi in Parliament on problems in the agricultural sector, asking him to visit Punjab and learn about the plight of farmers who are integral to the government’s flagship ‘Make in India’ initiative.
The government hit back, asking him to visit his own constituency first.Also Read: Rahul Gandhi attacks PM Modi in Parliament, asks him to meet farmersAhead of Rahul’s visit, a farmer named Gajanan Sheshrao Khongal allegedly committed suicide by jumping into a well in Morshi tehsil of the district on Tuesday.
Maharashtra is one of the states that experienced severe agrarian crisis and Amravati division in Vidarbha region has witnessed many suicide cases of farmers this year.
The Congress scion is being accompanied by Maharashtra Congress president Ashok Chavan and other senior state Congress leaders.
Rahul will visit five villages between Gunji to Ramgaon and will meet the farmers who have suffered crop losses due to unseasonal rain.
Rahul spoke to the people who greeted him and sought to know their problems and the issues affecting them. On the way to Gunji, people were seen lined up on roads at Kondhali and Talegaon villages to greet the Congress leader. Rahul stopped at Talegaon for some time, before proceeding to Gunji.
Rahul, who had arrived in Nagpur Wednesday night, left this morning for village Gunji to begin the foot march dubbed as ‘sanvad padyatra’.During the padyatra Rahul will meet farmers and families of those farmers who have committed suicide. He will discuss with them the agrarian crisis and also ways to help them tide over the problem.
Rahul Gandhi will shortly begin his 15-kilometre day-long padyatra in Amravati district to highlight the agrarian crisis in Vidarbha region. The ‘padyatra’ is part of Rahul’s programme to reach out to the farmers in distress in various states.